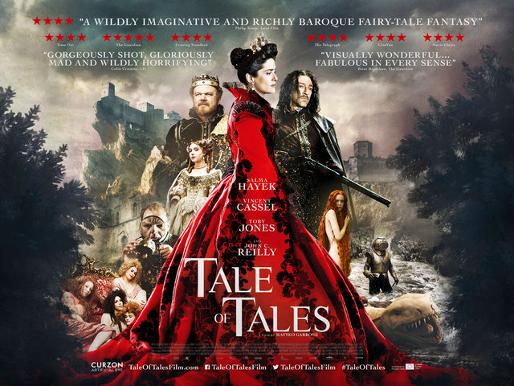 Italian director Matteo Garrone moves away from contemporary stories like Gomorrah and Reality with this striking and bizarre fairy tale collection based on the 17th century book Pentamerone by Giambattista Basile which included stories that went on to be translated and adapted by the Brothers Grimm.

The film utilises an interweaving plot comprising three stories set in neighbouring kingdoms. This includes Salma Hayek and John C. Reilly as a king and queen so desperate to have a child that they follow advice of a necromancer who suggests the king kill a sea monster, have the heart cooked by a virgin and then devoured by the queen. If followed correctly the queen will immediately become pregnant. Though the 'virgin' is anything but and things don't go as planned.

Another story sees Toby Jones and Bebe Cave as a king and his daughter. Distracted by a flea during one of the princess's music recitals, he begins to feed and nurture it until it grows to a massive size. It gives him the idea to use it in a seemingly impossible task to find the princess a husband. Sadly he is unprepared for the perceptive nose of a grotesque ogre.

Lastly Vincent Cassel is a lustful king who overhears the beautiful singing voice of one of his subjects unaware that she is one of two old crones. They hatch a plot to try and fool the king into falling in love without actually seeing how she really looks.

Beautifully shot by The Empire Strikes Back cinematographer Peter Suschitzky, Tale of Tales is a unique and often very odd film that may prove to be a little too weird and gruesome for most audiences, with a bit more nudity and blood than you'd normally expect from a fairy tale film. A solid and committed cast certainly help sell some of the odder moments with Jones in particular impressive as the slightly pathetic flea-nurturing king. While relative newcomer Bebe Cave holds her own against the more experienced cast as the princess fighting off the unwanted attention of a grotesque ogre.

Though occasionally betrayed by its relatively low budget (compared to other recent Hollywood made fairy tale films) it looks fantastic throughout, so that even if the stories don't grab you the impressive visuals should. Plus a fantastic score from Alexandre Desplat means it sounds glorious too. They certainly help make this curious oddity worth a visit.