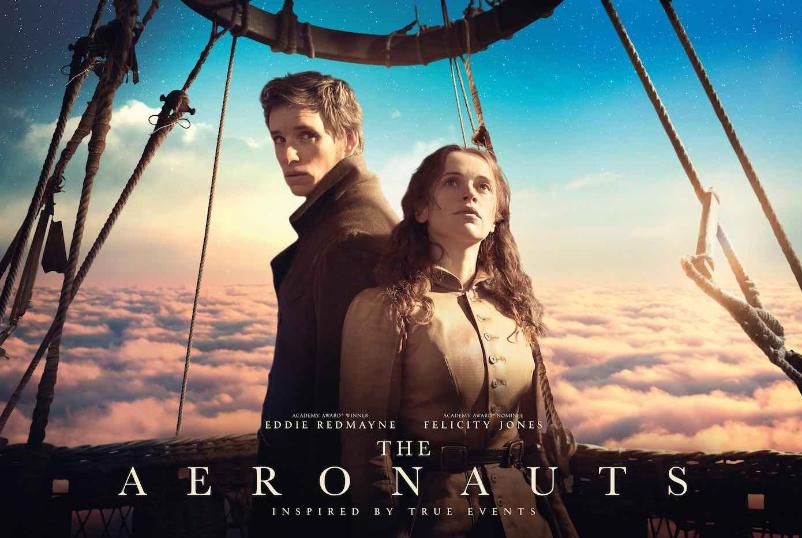 The opening title tells us that “The Aeronauts” is inspired by true events, the true events in question are that James Glaisher (Eddie Redmayne), one of the first meteorologists, in London, in 1862, did set a new altitude record in a balloon. The fictional part is, rather than been accompanied by Henry Coxwell, as he was in real life, he’s partnered by a plucky female pilot called Amelia Wren (Felicity Jones).

The story of “The Aeronauts” is set mostly within the confines of the balloon, with occasional flashbacks to both Glaisher and Wren’s earlier lives. Glaisher, who believes that you can predict the weather by measuring the atmosphere, is ridiculed by his peers whilst Wren, whose husband was killed in a previous high altitude attempt where she was the pilot of the balloon, has her own demons to overcome.

Director Tom Harper, whose last movie was the excellent but underrated “Wild Rose”, is helped in his story by some magnificent CGI effects, in one scene the pair have to pass through a storm which tosses the balloon about like paper in the wind.

Whereas the CGI is without doubt faultless the same can’t be said of the story as the first hour, with its many flashbacks and views of the balloon climbing through the clouds, is particularly slow. However the higher the balloon gets and the more danger the pair face the more exciting and interesting the story becomes.

If you do plan on seeing “The Aeronauts” try and catch it on the biggest screen you can as the view from the wicker basket of Victorian London is nothing short of stunning.