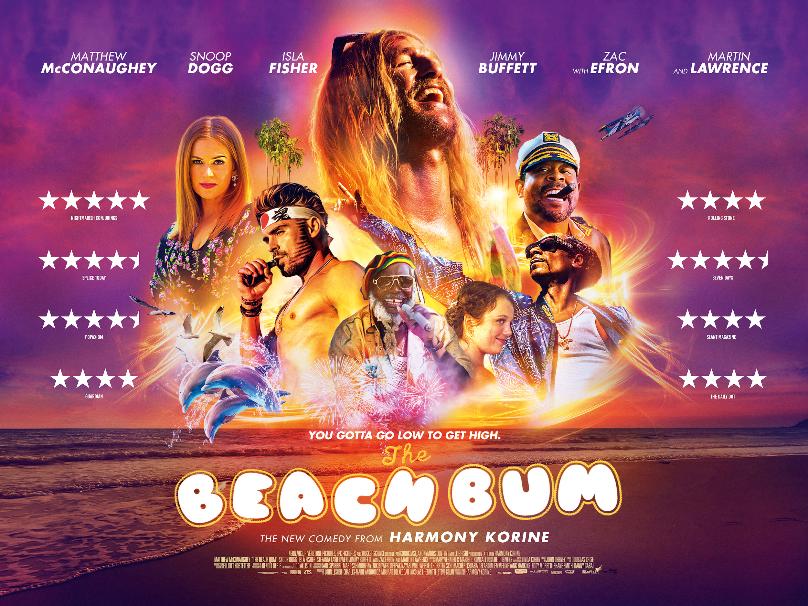 Matthew McConaughey appears to have had a lot of fun making The Beach Bum” as there’s hardly a scene in the movie where he’s not either out of his face on drugs or drinking from a can of beer. If only I could have had half the fun McConaughey had then I might have enjoyed “The Beach Bum”.

McConaughey plays the beach bum of the title, or as he’s known to his friends, Moondog.

Moondog is a free spirited hippy and famous poet who’s suffering from writers block and has moved to the Florida Keys for some inspiration.

Meanwhile up the coast, in her massive mansion, lives his wife Minnie (Isla Fisher). To say that the pair have an open relationship is putting it mildly, if he’s not stoned Moondog is having sex with nearly every woman in the Keys, in one scene he’s having sex with a waitress whilst in the background the chefs flipping the burgers. Meanwhile up the coast Minnie is having an affair with a rapper called Lingerie (Snoop Dog).

Without giving much away, and to be honest there’s not much to give away as the stories paper thin, when tragedy strikes Moondog is forced to revaluate his life. Along the way to finding a better life he encounters various strange characters (most of them are stoned like Moondog) including Martin Lawrence’s dolphin loving sea captain and a 98% blind pilot who, whilst flying, smokes a reefer the size of a small child’s arm.

The big problem with “The Beach Bum” is there’s not a single character in the whole movie with any redeeming qualities. Moondog is a child in a man’s body and acts as if the world owes him a living. In one scene, which is meant to be funny, Moondog escapes from a rehab centre with another inmate (Zac Efron in a fleeting cameo). On the run they batter an old man, who’s on his disabled scooter, over the head with a glass bottle. Then, when the old man and the scooter are upended, they help themselves to his money. Funny? not really.

McConaughey is excellent in the role and gives everything. Unfortunately I just didn’t get it. Perhaps “The Beach Bum” is meant to be watched through a pot induced haze.