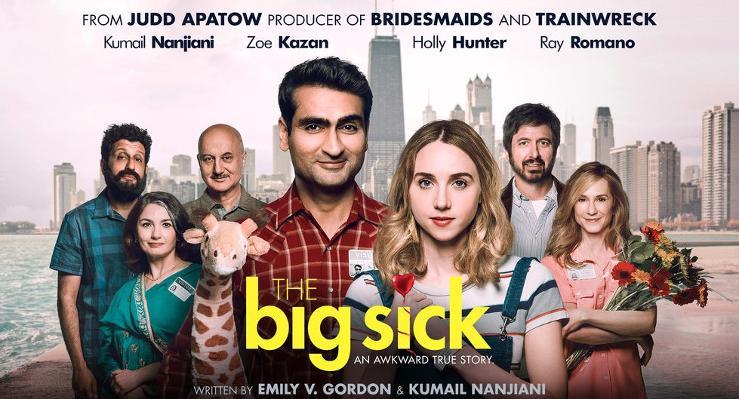 The Big Sick is based on the real-life courtship between Pakistan-born comedian Kumail Nanjiani (Kumail Nanjiani) and grad student Emily Gordon (Zoe Kazan) who fall in love but struggle as their cultures clash. When Emily contracts a mysterious illness, Kumail finds himself forced to face her feisty parents, his family’s expectations, and his true feelings.

Silicon Valley's Kumail Nanjiani makes a successful leap from supporting player to film lead with this sweet, emotional and very funny romantic comedy written with his wife Emily V Gordon and partly based on their early relationship.

Starting in fairly traditional rom-com territory with meet-cutes, culture clashes and minor arguments before taking a darker turn when Emily succumbs to a life-threatening infection that leaves her in a medically induced coma (hence the title).

Nanjiani makes for a flawed but engaging protagonist, struggling to reconcile his Pakistani heritage with his love for a white American woman and his desire for a career in stand-up comedy, while he is equally matched by a charming performance from Zoe Kazan as Emily. A minor though unavoidable downside, due to the nature of the true story that inspired the film, is that Kazan is absent for a large part of the story and this absence is clearly felt.

Thankfully that void is filled by an on-form Ray Romano and Holly Hunter who enter as Emily's parents. The awkwardness between them and Nanjiani leads ultimately to an oddly touching relationship that feels almost as important as the central one. It's also the source of much of the best laughs in the film, not least Romano's awkward attempt to discuss 9/11 with Nanjiani which leads to the film's funniest line.

Nanjiani and Gordon do a fine job juggling the tricky tones of the piece along with director and Wet Hot American Summer writer/creator Michael Showater, though the guiding hand of producer Judd Apatow is apparent too.

A fine film all round, that mixes emotional honesty and crowd pleasing laughs with impressive results. Highly recommended.