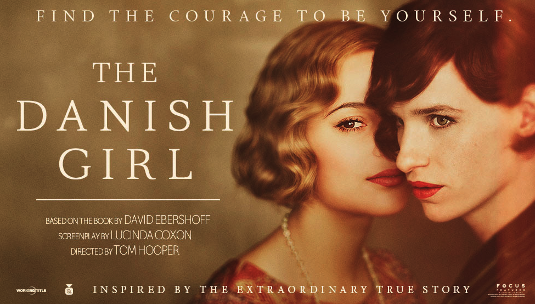 We first meet Einar Wegenar (Eddie Redmayne) and his wife Gerda (Alicia Vikander) in 1920's Copenhagen where they share an apartment that doubles as a studio for their fledgling careers as painters.

Blissfully married and envied by their friends for the bond that they have together things start to unravel when during a sitting for a portrait of a ballerina Gerda asks her husband to wear a dress and some stockings. It’s during this sitting that Einar's long repressed feelings about his sexuality starts to stir.

With the encouragement of his wife, Einar then moves from wearing woman's clothes in the privacy of the bedroom to attending social functions dressed fully as a woman, Gerda playing along with what she sees as a game introduces him to friends as her cousin Lili.

Gerda at first sees Einar's transformation into Lili as a bit of fun and goes along with it but when Lili starts to take over Einar's personality and he begins to realise that he's a woman trapped in a man's body things start to change in their relationship.

"The Danish Girl" is an interesting but rather underwhelming film. The period detail is fantastic and it makes the film great to look at however its one underlying flaw is in Redmayne's performance which never at any time feels natural, every pout and flutter of his eye lids feels forced. There's one scene where Lili is boarding a train on her way to undergo gender reassignment surgery and looking back at Gerda she flutters her eyes, Lili at that point looks more like Tony Curtis's cross dressing character in "Some Like It Hot" than a real woman trapped in a man's body.

Much as Redmayne's performance feels stilted the same can't be said of that of Alicia Vikander whose understated natural performance is the exact opposite of Redmayne's.

"The Danish Girl" is a good film but not the great film that some critics would have you believe.