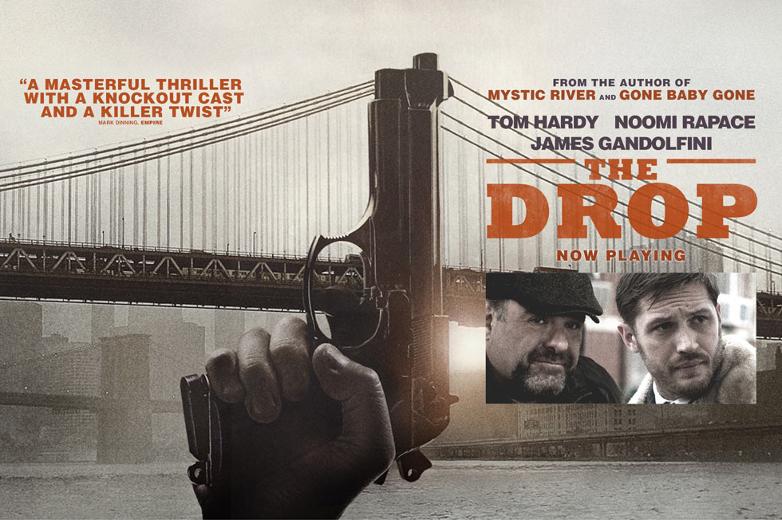 “The Drop” of the title is a bar where the mobs dirty money is deposited and can be left until the heat is off and it's safe for them to pick up. One such bar is called Marv's, named after Marv (James Gandolfini in his final screen appearance) the Brooklyn bar has seen better days and Marv, who was has lost control of the bar to the Chechen mob after running up a gambling debt, is struggling to keep the business afloat. His one employee is his cousin Bob Saginowski (Tom Hardy "Locke"), a soft-spoken man who likes to keep his head down. Unfortunately for cousin Marv his bar is robbed one night by two local drug addicts, the prize being the mobs drop money that he's meant to be watching. Unfortunately for Marv the Chechen mob who the money belonged to want it back and they order Marv and Bob to recover the money.

Bob, who was present at the time of the robbery appears to be a bit slow on the uptake and oblivious to the danger that he and his uncle Marv are in. Of course Bob has his own troubles and it involves a dog and a woman.

Walking home one night Bob hears the sound of a dog squealing in someone's dustbin, upon investigating he finds that someone has abandoned a Pitt bull terrier puppy. Hearing someone rummaging in her bin Nadia (Noomi Rapace) comes out to investigate. After at first being a bit fearful she is eventually won over by Bob's easy going charm and they're soon in her apartment tending to the dogs injuries. Reluctantly Bob agrees to take the dog, who he calls Rocco, home. Unsurprisingly the pairs paths cross again and they become good friends. Bob then to his surprise gets an unexpected visitor to his home, the owner of the dog and he's looking for it back. The alleged owner isn't some kindly old lady but a onetime psychiatric patient and alleged killer called Eric Deeds. To make matters worse he's an ex of Nadia's and he's determined to get both the dog and her back.

People and circumstances are not what they seem in The Drop and as the climax builds to the Super Bowl Sunday, the biggest drop night of the year, people have to make decisions that could determine wither they live or die.

“The Drop” is a slow paced movie that will be sadly remembered as James Gandolfini's last film. It also has a great performance from Tom Hardy who is making a bit of a reputation for himself as a great actor in lesser films. Hopefully next years "Mad Max" where he plays the title role could be his breakout movie. Nothing really much happens in the first 90 minutes, the time being used building the characters and the story for a powerful last 15 minutes. The Drop is enjoyable if you like your thrillers to be character driven, unfortunately I'm sure that the one thing that will be remembered about “The Drop” is that it was a movie that had an adorable puppy in it.