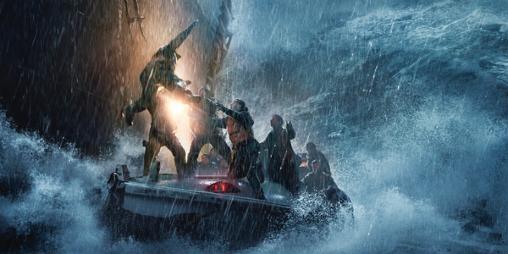 A heroic action-thriller, “The Finest Hours” is the remarkable true story of the greatest small boat rescue in Coast Guard history. Presented in Digital 3D™ and IMAX® 3D, the film will transport audiences to the heart of the action, creating a fully immersive cinematic experience on an epic scale.

Based on real events that took place in the 50s off the Massachusetts coast, The Finest Hours tells the heroic story of a lifeboat crews attempt to rescue sailors’ from a tanker that's broke in half in a massive storm and is adrift in the Atlantic.

Chris Pine plays Bernie Webber, the man in charge of the rescue boat, whilst Casey Affleck's is Ray Sybert the one person on the stricken tanker who manages to keep a cool head and on who the responsibility falls to keep the panicking crew together before a mutiny breaks out.

Meanwhile onshore Webber's fiancé (Holliday Grainger) realising that her man’s been sent out on what amounts to a suicide mission fights with the commander of the coastguard (Eric Bana) to get Webber’s boat turned round before he himself becomes a victim of the ferocious storm.

The Finest Hours feels like an old fashioned disaster film that's being brought up to date with some state of the art special effects and at times pretty good 3D.

The action once the men embark on their rescue mission is pretty relentless.

Pine and Affleck are good but this is one film where the plaudits have to go to the special effects team.