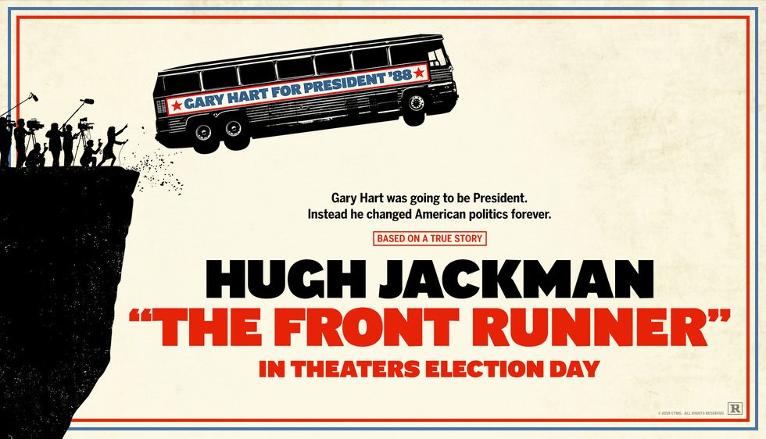 However his campaign hit the buffers when one night journalists, who are camped outside his home, see him go in with a woman who isn’t his wife.

The resultant sex scandal and the fallout that came from the media coverage was to ultimately cost him the Presidency.

The Front Runner, is interesting and Jackman plays the part of a man who might or might not have been wronged very well, as does Vera Farmiga as his “supportive” wife and J.K. Simmons as Hart’s campaign manager.

The one problem with Director Jason Reitman’s film is that it feels as if time has passed it by as sex scandals involving politicians are common news now and more often than not don’t even make front page news.

However I don’t think that Reitman is trying to give us a tale of the past but more a tale of how, and remember this is an American story, the press are responsible for where American politics is now.

Hart whilst giving his resignation speech to the press tells them that through their actions “In the future we’ll get the leaders we deserve”. If that isn’t a nod to today’s politicians then I don’t know what it is.

Go and see The Front Runner watch it and enjoy it, but remember to look deeper than the single sex scandal that ultimately brings down Hart. Do that and you might find The Front Runner more substantial than it first appears.