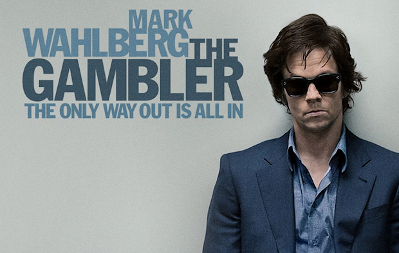 The original version of "The Gambler" is a long forgotten film from 1974 starring James Caan. For some reason it's been decided that the times right for a modern update and in place of James Caan we now have Mark Wahlberg.

Wahlberg plays Jim Bennett, a professor of English who has a serious gambling problem. We first meet Bennett when he's with his father who is on his death bed. As it turns out Bennett's father is an extremely wealthy man but to Bennett's shock his father’s last words to him are to tell him that he will be inheriting none of the family's wealth. His father is no sooner dead and Bennett is at the blackjack tables gambling away thousands of dollars that he hasn't got. Unfortunately the casino that he chooses is run by Mr Lee (Alvin Ing) an Asian gangster who has been tolerant about Bennett's debt in the past but is now no longer willing to turn a blind eye and warns him that he has one week to pay back the $240,000 that he owes him and if he doesn't then the consequences will be dire.

In an effort to pay back his debt to Mr Lee, Bennett borrows $50,000 from a loan shark named Neville Baraka (Michael Kenneth Williams). Needlessly to say Bennett loses this money and so begins a race against time to raise funds that would allow him to pay back his debt.

It's hard to feel sorry for Bennett as he seems to have something of a death wish, he borrows a large sum of money from his wealthy mother (Jessica Lange) and immediately goes and loses the whole lot at a casino. In a pattern of borrowing from Peter to pay Paul he approaches money lender Frank (John Goodman) who warns him that should he accept his services then he should be prepared to pay the ultimate price if he fails to pay back his debt.

When Bennett is not running up gambling debts and trying to avoid gangsters he teaches a college class on modern literature. His class consists mostly of students that are only there because they have to be, the one shining light in an otherwise talentless class is Amy Phillips (Brie Larson), a brilliant student and a part-time casino employee who just happens to know about her professors double life.

"The Gamblers" suffers from the problem that its story drags along at a snail’s pace with large sections being taken up by characters that seem to talk on and on. Wahlberg is as always watchable in the lead role but like the 1974 original there won't be many people will be talking about this film in 40 years’ time.