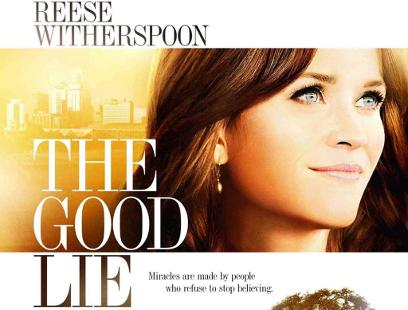 “The Good Lie” tells the true story of the "Lost Boys'", over 3,000 refugees from Sudan who escaped the war torn country and set up a new life in America.

Whilst the story is based on fact the story of the boys in the film is purely fiction. Mamere (Arnold Oceng), Paul (Emmanuel Jall) and Jeremiah (Ger Duany) after a harrowing trek across parts of Africa the trio spend 13 years in a refugee camp before they manage to get accepted in the American immigration program. They are then taken to their new home in Kansas City, Missouri where they are met by employment agency counsellor, Carrie (Reece Witherspoon). As well as integrating the three of them into their new surroundings she also has the task of finding them jobs.

"The Good Lie" plays like a film in two part, the first 40 minutes, and the best part of the film, is set in Africa and shows the horrors and brutality that the children were put through before they successfully made it to America. The second half is a fish out of water story as the three African boys try to adapt to things that westerners take for granted.

The three leads, who were all Sudanese child soldiers, are excellent.

At times "The Good Lie" can border on being over sentimental but overall it's an enjoyable film with some sparkling performances from a largely unknown cast.