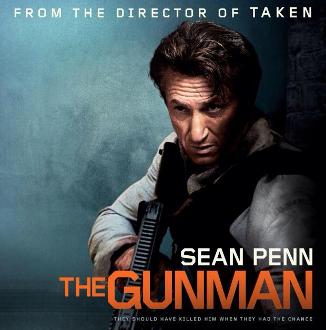 Sean Penn takes a leaf from Liam Neeson's book and takes a turn at the ageing action hero. Sadly "The Gunman" is no "Taken" the only similarity being that they both have the same director.

Penn plays part of a team of mercenaries working in The Congo, their primary job is to protect a humanitarian team that is working in the worn torn region. However Penn and his team are not all that they seem as they have a nice little side line in assassinations. One of their targets is a government minister who is trying to ban foreign companies from mining in the Congo, Penn makes the hit and then, as is their plan, he moves out of the country and has no further contact with the rest of the team.

Years on from the assassination Penn has become a respectable business man but when his past comes back to haunt him and his former team members start to get "taken out" and he also becomes a target it's up to Penn to put together the pieces and work out who's trying to take out his former team.

"The Gunman" as you would expect has a number of great action scenes however the problem is when there's no action on the screen as the story drags along at a snail’s pace and becomes more and more ridiculous the longer that it goes on.

Penn is usual reliable self which sadly can't be said of the supporting cast, Mark Rylance so great in TV series "Wolf Hall" is awful, one of the best theatre actors around at the moment gives a performance that can only be described as hammy and amateurish and Javier Bardem over acts as if his life depended on it, although given what happens to most of the characters in the film, maybe it did. The only one who comes out with any credit is Idris Elba who is shockingly underused throughout the whole thing.

Given the talent that's on screen "The Gunman" has to go down as a major disappointment.