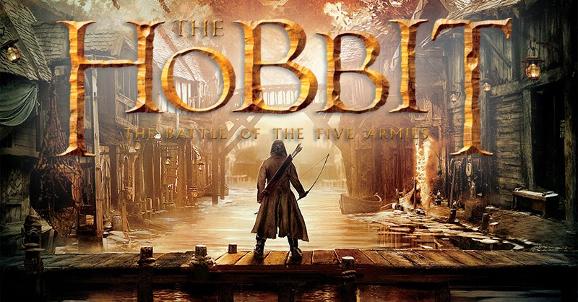 The last words spoken in last years "The Hobbit: The Desolation of Smaug" was by Bilbo Baggins (Martin Freeman) as he watched Smaug (voiced by Benedict Cumberbatch) heading towards Lake-Town looking for vengeance on the helpless inhabitants, he said to himself "what have we done".

It's now a year on and Peter Jackson’s marathon adaption of J R Tolkien’s "The Hobbit" reaches its final stunning conclusion.

"The Battle of the Five Armies" starts straight from where we left Bilbo in The Desolation of Smaug. The dwarves, led by Thorin Oakenshield (Richard Armitage), are now holed up in the Lonely Mountain, unfortunately Thorin's not the man that he once was as he's succumbed to a dragon sickness causing him to become obsessed with guarding the dwarves' treasure. Thorin now trusts no one and unfortunately for him a number of other people have an eye on his treasure. There's arrogant Elven King Thranduill (Lee Pace) who has led his vast army to the gates of the Lonely Mountain looking to reclaim his ancestors treasure. There's the Orcs, led by Avog the Defilier (Manu Bennett), who have been pursuing the dwarves since they left The Shire. Also laying claim to the treasure are the humans of Lake-Town, led by the bargeman (Luke Evans)' their looking for their share of the treasure that was promised to them by Thorin. It's against this backdrop of self-interest and greed that the final battle for the Lonely Mountain takes place.

The final battle involving five giant forces, made up of all sorts of creatures, including war trolls, battle chariots pulled by armoured mountain goats, giant worms that appear from vast tunnels, is spectacular. In "The Hobbit: An Unexpected Journey and "The Hobbit: The Desolation of Smaug" there was a feeling that, no matter what happened to the dwarves on their travels, no harm would come to them. This feeling of invincibility is now blown out of the water as characters that we've come to know meet their final and fateful destiny.

The Hobbit: The Battle Of The Five Armies (3D)