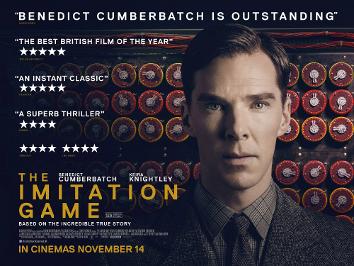 “The Imitation Game" tells the story of Alan Turing (Benedict Cumberbatch), a mathematician who was largely responsible for breaking the German enigma code during World War 2. Turing who some have described as the father of modern computing had the job of deciphering the Germans encrypted code that had many billions of combinations with a key that changed everyday, causing the code breakers, if they hadn't cracked that days key, to start all over again.

In what is essentially a race against time Turing and his team of code breakers (Keira Knightly being amongst them) have not only to fight the Germans ever changing code but also their own superior officers (Charles Dance) who are quickly becoming exasperated by the teams lack of results.

Thrown into the mix a sub plot concerning Turings homosexuality and the prejudices of 1950s Britain. This part of the story is what gives The Imitation Game its soul, as without it what we would have been left with is a rather dry film about a team of boffins who are trying to crack a code.

The topic has been covered before, most recently in the Dougry Scott film "Enigma". “The Imitation Game” doesn't bring much that's new to the table but what it does bring is an outstanding performance for Cumberbatch as Turing and enough thrills to keep you on the edge of your seat.

The Imitation Game (12A)