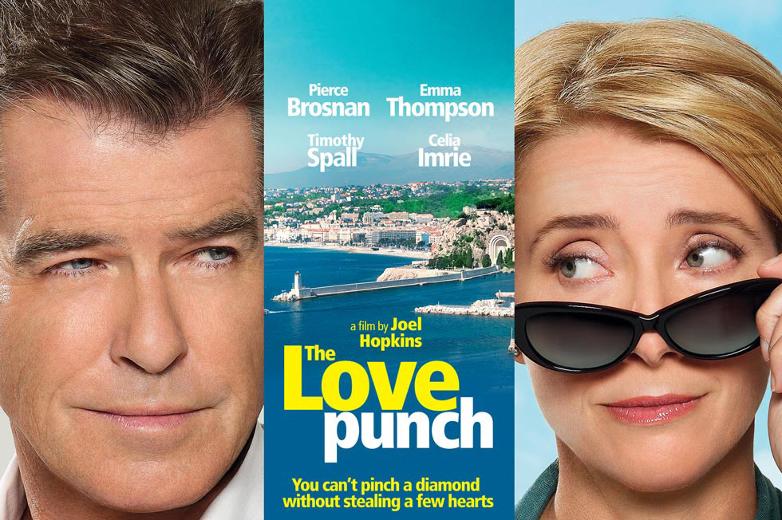 Pierce Brosnan and Emma Thompson now get in on the act with "The Love Punch". Directed by Joel Hopkins (who directed Last Chance Harvey, which also starred Emma Thompson), "The Love Punch" feels like some throwback to an old 1960's heist-caper comedy. It's surely no coincidence that one of the characters mentions The Pink Panther Movie.

Brosnan and Thompson play divorced couple Richard and Kate Jones. Only a week from his retirement, Richard, who has sold his company to an unscrupulous French financier, Vincent Kruger (La Comedie Francaise’s Laurent Lafitte), turns up for his work one morning to find that the doors have been shuttered and that he and all his staff have been made redundant. Unfortunately all of Richard and Kate's finances are tied up in the company and the closure means that their pension is gone and they are left with nothing. Richard then vows to fix the situation and persuades Kate to join him on a French adventure to steal a $10 million diamond necklace belonging to the dastardly French Financier. Let's nick it Kate tells Richard after he's told her about his less than honest plan.

The pair then head off to France where, in a plot that is simply bonkers, they get involved in a series of ever more ridiculous adventures. The director’s idea of comedy seems to be to wedge his stars into the smallest car that he can find and get them involved in an improbable car chase through the streets of Paris. And just when you think that the film couldn't become anymore ridiculous, Richard and Kate decide that they need help and somehow manage to convince Kate's next door neighbours Jerry (Timothy Spall) wife Penelope (Celia Imrie) to get involved in their illegal caper. I say convince but it only takes the pair about 10 seconds to agree to get involved.

The four intrepid diamond thieves then head from Paris to the South of France where they plan to take the place of four Texans and then disguised as them sneak into a French Chateau where Kruger is holding his wedding to his socialite fiancée (Louise Bourgoin). I say sneak in however it does involve some scuba diving and abseiling, both of which they seem to be, for some unknown reason, very good at.

Once in the chateau, and after they've had a break for tea and sandwiches, they plan to swap the real diamond for a fake that Jerry has somehow manage to acquire from his many contacts. Along the way the ageing thieves manage to get involved in various illegal activities including kidnapping, drug running and the shooting of an illegal firearm ( in a restaurant of all places, but Jerry can fix this because he has a contact).

As you can gather The Love Punch is nothing short of ludicrous, however the charm of its leads does somehow manage to just about pull this pile of utter tosh through. The Pink Panther it most certainly is not, (I’m referring to the original classic starring Peter Sellers not the excruciating remake starring Steve Martin) but as a piece of escapist fun it just might raise the odd laugh or two.