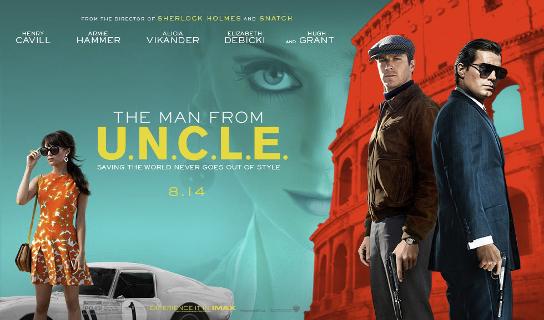 Based on the 60's TV series of the same name, The Man from U.N.C.L.E stars Henry Cavill as Napoleon Solo and Armie Hammer as Illya Kuryakin.

Set in the 60's we are first introduced to the pair in a pre-credit sequence that's worthy of a place in any James Bond film. Solo, an American spy, is trying to rescue the daughter (Alicia Vikander) of a missing German scientist, his objective is to get the girl across the Berlin Wall and out of Soviet controlled East Germany, but unfortunately for the pair they are being pursued by crack KGB agent Kuryakin.

However when it turns out that the German scientist is working for the Nazis and is trying to develop a nuclear bomb Solo and Kuryakin are forced to work together in order to thwart off a nuclear attack.

Directed by Guy Ritchie (Lock Stock and Two Smoking Barrels, Sherlock Holmes) U.N.C.L.E is everything that the recent Mission Impossible Rogue Nation was not. It's funny, thrilling, exciting and above all the story won't have you nodding off in-between the action set pieces. In a summer that's been filled with blockbusters that have failed to live up to expectations Man from U.N.C.L.E is a film, if you enjoy action films, that's not to be missed.