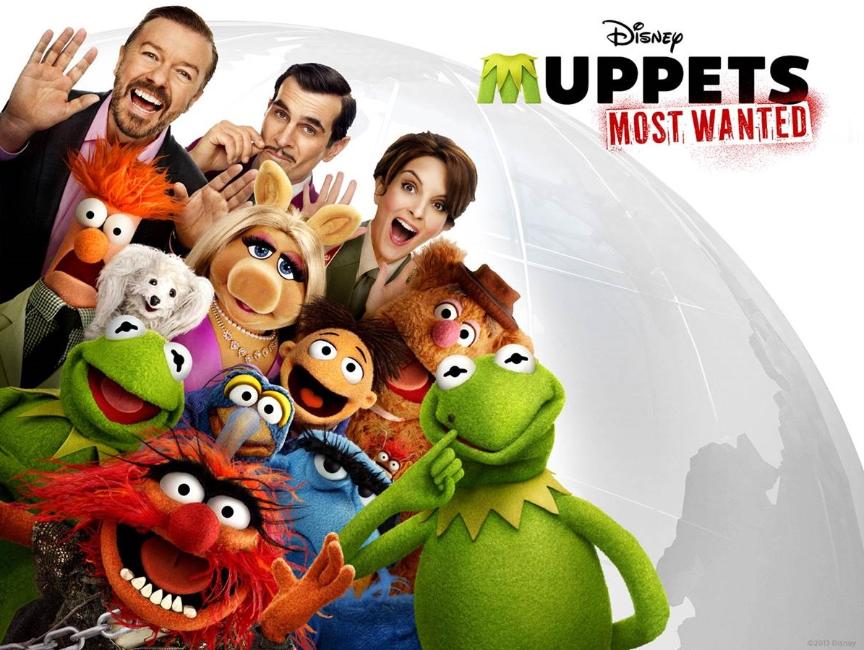 "The Muppets Most Wanted" was always going to be a big test. Would it be as good as The Muppets last film in 2011? This was always going to be a big ask as 2011's film was successful in so many ways. It not only breathed new life into a franchise that had been lying dormant for years but it was also just the perfect Muppet film. The musical numbers were worthy of Oscar nominations, new characters were created, beloved characters were reintroduced and everyone including the audience had such a great time.

So is "The Muppets Most Wanted" up to the task. The answer sadly has to be no. It's not that this film is bad, no film starring The Muppets could be bad, it's just that it seems ordinary compared to Jason Segels classic. If I'm being honest it's more comparable to "The Great Muppet Caper" then the aforementioned Muppet Movie.

This is the seventh sequel to the original "The Muppet Movie" (1979) and begins immediately after Segels film finished. Walter and company are on Sunset Boulevard and wondering what they will do next. Ominously they break into a song which includes the line "Everybody knows that the sequel's never quite as good." No sooner has the song finished and they're approached by smarmy Dominic Badguy (pronounced "Bad-jee" (Ricky Gervais) a promoter who signs them up for a world tour. Little do they know that BadGuy is in cahoots with Constantine, “the world’s most dangerous frog,” who just happens to bear a startling similarity to Kermit (except for a mole on his face). Their plan is to use the Muppets world tour as a front to steal the Crown Jewels. A case of mistaken identity then results in Constantine taking Kermits place and Kermit being placed in a Russian Gulag where he has to contend with a warden played by Tina Fey.

What follows is typical Muppets fair as corny jokes are interspersed with various cameos including Christoph Waltz who unsurprisingly dances a waltz, Salma Hayek who attempts to do an indoor Running of the Bulls, Tom Hiddleston playing a gulag escape artist named Escapo Saoirse and Ray Liotta and Danny Trejo singing and dancing up a storm as gulag prisoners. Watch out for "I really need this job" number from Chorus Line sung by them in the Gulag it's priceless.

This time around writer/director James Bobin gives us a more adult version of The Muppets and parents might find their children getting restless as some of the jokes go over their little ones heads. For adults who were brought up with the Muppets, "The Muppets Most Wanted" might not be as good as the last Muppet film but it's still fantastic fun and an incredibly entertaining comic adventure.

After all what's not to like it’s a Muppet Movie after all.