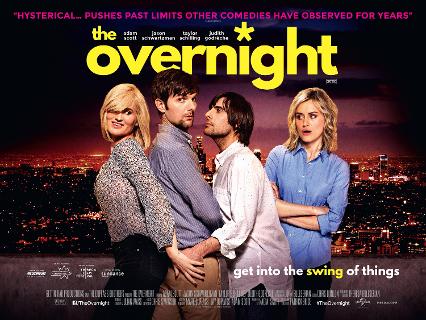 In The Overnight Adam Scott and Taylor Schilling play a young couple who have just moved to Los Angeles with their young son.

Feeling somewhat isolated and unable to make new friends the pair are flattered when, at a children's play park, their approached by two fellow parents, played by Jason Schwartzmen and Judith Godreche, and along with their son, their invited over to their new friends home for dinner and drinks.

Needless to say when the couple arrive at their dinner date the pair find that their hosts’ intentions is to have more than dinner with them.

What follows is an enjoyable game of cat and mouse as the shy couple are drawn more and more into the bizarre world of their new friends. Schwartzmen's characters main hobby is getting people to pose for pictures so the he can paint, believe it or not, their anus, whilst his wife has a liking for dropping down to her local massage parlour for some light relief.

Admittedly The Overnight and it's adult themes might not be to everyone's taste but if is your type of film then what you'll find is a fascinating and intriguing story wonderfully played by the four main actors.

The only complaint is that after a great set up where it is very much a will they or won't they be seduced by their more sexually experienced neighbours the story is let down by a rather unbelievable and unexpected, in terms of what had went before, ending that appears to be included for no more than its shock value.