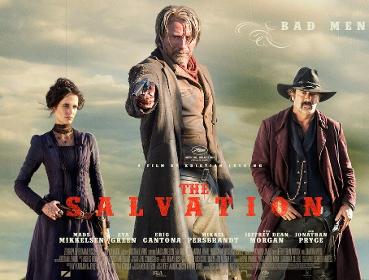 "The Salvation" is an old fashioned Western brought into the modern age, for modern age read copious amounts of violence.

Set in 1871 it tells the story of Jon, a Danish immigrant who has moved to the frontier West with his brother. After being apart from his wife and son for seven years he arranges for them to join him in the States. Unfortunately they have no sooner set foot on American soil when they are killed by two drunken outlaws.

Jon then deals out his own retribution on the two outlaws. It's later on when Jon returns to his farm on the outskirts of a remote western town that we find out that one of the men Jon killed was the brother of a wealthy but brutal landowner, Delarue (Jeffrey Dean Morgan) and he is out to avenge his brother’s death. Jon unfortunately can't rely on the support of the towns folk as they live in fear of Delarue, who when investigating his brother’s death ,takes to killing innocent townsfolk until they come up with the name of his brothers killer.

Director Kirstian Levring is obviously a fan of 50's westerns as The Salvation plays like a homage to past westerns, Jon could be Gary Coopers character in High Noon and there's also echoes of John Ford, watch the framed shot in the door way that has an uncanny similarity to Fords parting shot in "The Searchers".

As was the way with most classic westerns there's not a lot to the story, it's generally good guys against bad guys with a woman in the middle, in this case Eva Green plays the solitary female lead.

If you love westerns then don't miss "The Salvation"