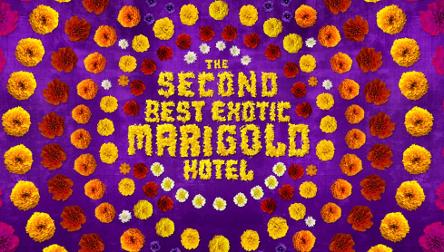 The film opens eight months after the events in the first film and we find co- managers of the Exotic Marigold Hotel, Sonny (Dev Patel) and Muriel (Maggie Smith), in San Diego trying to convince a US business man (David Strathairn)"to invest in there plans to expand their business. The concept of the business you'll remember is that the hotel is a place where the "elderly and beautiful" go to live out there twilight years. Their meeting appears to go successfully, even despite the fact that Muriel complains about how the Americans can't make a decent cup of tea, before they leave there possible future business partner hints that he'll be sending over an undercover hotel inspector to see first-hand how their business is doing.

It's then back to Jaipur where the elderly residents of the hotel are adjusting to their new way of life. Douglas (Bill Nighy) who is now a not so good tour guide and Evelyn (Judi Dench) who is now a fabric buyer for a UK based company are both still unable to disclose their true feeling to one another. Norman (Ronald Pickup) and Carol (Diana Hardcastle) are still working their way through the pages of the Kama Sutra and finally Madge (Celia Imrie) is trying to keep two rich suitors going until she can decide which one she wants to marry.

Then out of the blue two new guests turn up at the hotel, there's novelist Guy Chambers (Richard Gere), he is there to write a book and just happens to take a shine to Sonny’s mother. The other new guest is Lavinia (Tamsin Grieg) who is at the hotel to check out if it's a suitable place for her elderly mother to come and stay.

Meanwhile Sonny is so preoccupied with his expanding business that he is neglecting his bride to be Sunaina (Tina Desai) this not being a good idea as he has a rival in Kushal (Shazad Latif) who has an eye on both Sunaina and taking a slice of Sonny's expanding business.

“The Second Best Exotic Marigold Hotel” does take some time to get going, the plot line where Norman thinks that he has unwittingly arranged a hit on Carol feels like it's from another film. However once it kicks into gear the whole thing feels as if you’re visiting an old friend. The warmth, laughs and wonderful characters that made the first film so much of a pleasure are there in abundance. This is one hotel that's worth checking into again. Not to be missed.