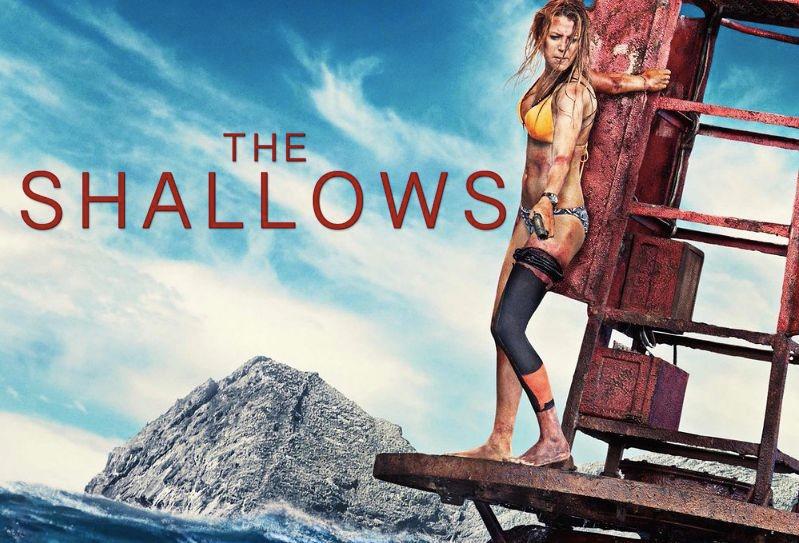 Blake Lively plays Nancy, a medical student taking an extended break from her studies to visit and surf on a secret, secluded beach that her late mother had visited when she was pregnant with her. This idyllic paradise soon becomes anything but however when she encroaches on the feeding ground of a Great White Shark. Not taking too kindly to her intrusion it bites and wounds her, leaving her stranded on a small rock 200 yards from shore with only a wounded seagull for company, high tide quickly approaching and the shark slowly circling.

With the serious likes of Jaws a distant memory, Shark movies have been mired in the schlocky B-movie backwaters for several years now thanks to the likes of the Mega-Shark series and the, miraculously, even more absurd films that stuck the killer beasts in tornados, avalanches and deserts. So it comes as something of a relief to find a movie like The Shallows, which for most of its running time has more in common with tense nail-biting films such as 2003's Open Water.

Wisely keeping it's shark to the shadows for most of the film with the occasional glimpse (the low budget and occasionally dodgy CGI elsewhere no doubt a factor), the film relies instead on the impressive Lively, who acquits herself well to a role that has her on screen for the majority of the film. Whether she's squeezing herself into a tight wetsuit, stitching up an unpleasantly gory leg wound or talking to the similarly wounded bird she names Steven Seagull (listed in the end credits as Sully 'Steven' Seagull) she ensures the film remains watchable throughout.

Collet-Serra also manages to show a bit more restraint than usual, offering up several simple but effectively tense set pieces. It's only in the last 10 minutes that he succumbs to his tendency for daftness with the shark coming aggressively out into the open and the film starting to resemble the kind of shark film that it had been purposely avoiding up until that point. Thankfully Collet-Serra doesn't drag this out for too long and as a result doesn't completely unbalance the movie.

That slight misstep aside, The Shallows is a solid entry into an increasingly maligned genre and at 86 minutes never outstays its welcome.