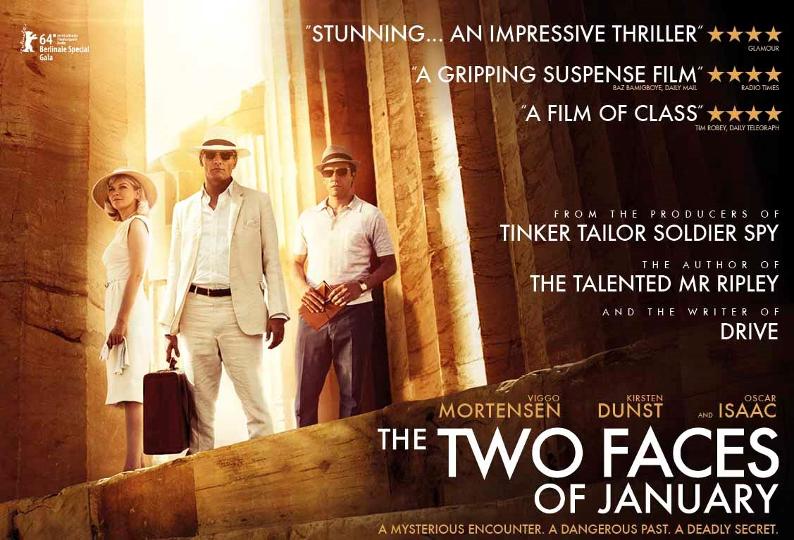 “The Two Faces of January” plays like a good old fashioned thriller. Based on a novel by Patricia Highsmiths, Highsmith is also responsible for classics such as “The Talented Mr Ripley” and “Strangers on a Train”.

“The Two Faces of January” tells the story of Chester (Mortensen) and Colette (Dunst) Mac Farland, a happily married American couple who, when on holiday in Greece meet a young tour guide called Rydal (Oscar Isaac). However Rydal is not all that he seems, as well as being a tour guide he's also a con artist whose speciality is separating wealthy tourist from their holiday cash. Seeing the Mac Farlands as easy prey he quickly targets them, unfortunately for Rydal the Mac Farlands are not all that they seem as they have a dark past that is about to come back and haunt them. On the evening that Rydal agrees to meet the Chesters, and before they can leave their hotel room, they get a visit from a private eye who is looking to collect money that Chester has stolen in a scam back in America. Unfortunately for Chester and the detective things don't go too well during the confrontation and soon there's a dead body in the bathroom.

Rydal, finding out about the death decides to help the couple escape from mainland Greece to the Island of Crete. It's from Crete that they hope to make their way back to the United States.


It's during the journey that things start to unwind and mistrust starts to creep in, is Rydal as helpful as he seems or is he after the couple’s money or is it in fact Colette herself that he's after.

If Alfred Hitchcock was alive this would have been the type of film that he would have made. At times Two Faces of January is just classic Hitchcock; watch out for the scene in the airport and you'll see what I mean. If this was 50 years ago it would be Grace Kelly and Cary Grant instead of Mortensen and Dunst.

In a time when most of the films at the cinema are either superhero films or gross out comedy's The Two Faces of January is like a trip back in time to when films were simpler and all the better for it.

This is a film that’s as classy as it is entertaining and comes highly recommended.