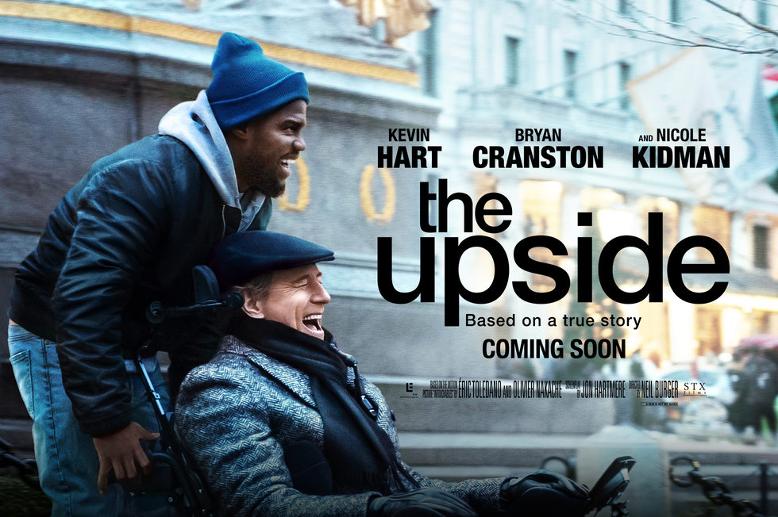 Based on a true story and inspired by the French film Les Untouchables, The Upside stars Bryan Cranston as Phillip, a self-made billionaire left paralysed from the neck down after a paragliding accident. Needing to hire a personal carer he meets Dell (Kevin Hart), an unemployed African-American ex-convict, after he happens to stumble into the job interviews. Dell only being in the building looking for a job as a janitor

Against the wishes of his assistant, Yvonne (Nicole Kidman) Phillip gives Dell the job.

Turning up for the first day on the job Dell asks Yvonne for a Metro card so that he can travel to Phillips home, only to be told that the position requires him to stay with Phillip 27/7 and to be on call at all times.

The Upside shouldn’t really be funny, after all the main character is a quadriplegic, but surprisingly there’s a lot to like about The Upside. Dell’s a fish out of water and there’s plenty of jokes at his expense as he learns how to change a catheter and to be at Phillips beckon call.

However it’s not all light as there is a dark and touching side to Director Neil Burger’s film. Particularly when it dawns on Dell why Phillip has actually hired him.

As well as the pair bonding and learning from each other there’s a nice subplot concerning Phillips long relationship with an unknown female through letters that the pair send to each other.

Cranston is his usual wonderful self in the role whilst Hart manages to rain in some of his over excesses and gives a more restrained performance which the films all the better for.

There’s a lot to like in Burger’s film and it comes, even if you’re not a Kevin Hart fan, highly recommended.