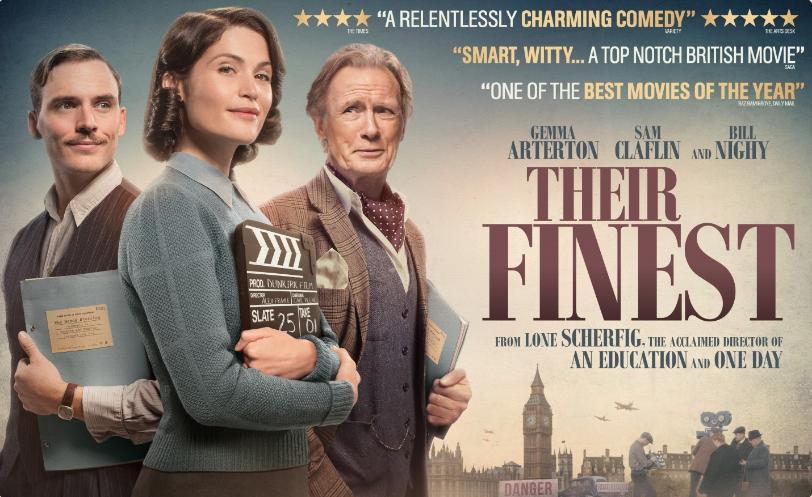 Gemma Arterton shows how talented she is in the charming British wartime comedy, Their Finest. Helped by fine performances from the largely British cast that includes Richard E Grant, Helen Mc Crory, Eddie Marsan, Jeremy Irons, Jack Huston and Bill Nighy in scene stealing form as a one-time screen idol, whose glory days are most certainly behind him. Danish director Lone Sherling has come up with a classic British film that’s guaranteed to be hit with cinema audiences.

The story sees Catrin Cole (Arterton) being forced to take up a position as a secretary at the British Ministry For Information after her artist husband (Jack Huston) fails to sell any of his paintings. The Ministry of Information produces propaganda films that are meant to raise the nation’s spirits in its darkest hour.

Heading up the department is Rodger Swain (Richard E Grant) who tasks scriptwriters Tom Buckley (Sam Claflin) and Raymond Parfitt (Paul Ritter) to find a true story of wartime heroism that they can commit to film. The pair come up with the real-life rescue of wounded British soldiers from the beaches of Dunkirk by twin sisters’ who used their father’s boat.

Cole is then given, what is seen as the menial task, of interviewing the two sisters’. Of course this being 1940’s Britain sexism is rife and Cole struggles to get her and the two sisters voices heard in what the studio see as a masculine picture that has no part for two quiet unassuming females.

Their Finest is wonderfully photographed, it looks as if the producers have spent every last penny on their set decoration as the recreation of 1940’s London is remarkable.

If you are a lover of British comedy then Their Finest is not to be missed.