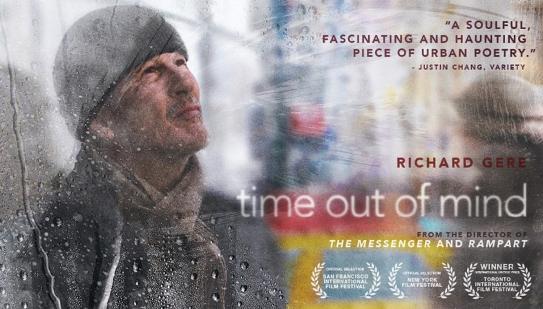 Richard Gere plays George, a former high-flying business man who is down on his luck and living on the streets of New York. Living between a hostel and park benches, George, whose back story is never fully explained, has only one purpose in life, and that's to reconnect with his daughter (Jena Malone). Unfortunately his daughter wants nothing to do with her father leading George's life to spiral even further downhill.

With lingering shots of George sitting and sleeping on park benches, sitting between garbage bins and drinking from his daily six pack of beer, sitting on trains, in fact the vast majority of the film sees George sitting somewhere pondering on how he has managed to get himself in the situation that he finds himself in, Time Out Of Mind is a hard watch helped only slightly by a mesmerising performance from Richard Gere.