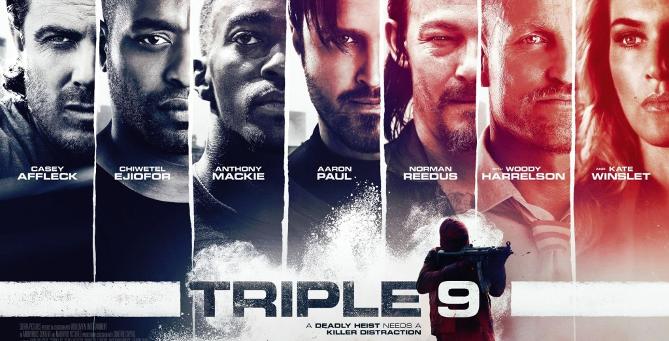 When a crew of dirty cops is blackmailed by the Russian mob to execute a virtually impossible heist, they realise the only way to pull it off is to manufacture a 999, police code for "officer down". The chaos that ensues when a police officer is shot in the line of duty is just the diversion they’ll need to do the job, but whether they have the will to kill one of their own is an entirely different matter, triggering a breakneck, action packed finale tangled with double-crosses, greed and revenge.

Make sure that you never drop your attention when watching Triple 9 because if you do you risk being left totally confused as to what's going on. With long periods of action that don't necessarily add much to the story the odd snippet of information that you need to keep abreast of the story are so few that it's easy to drift and miss an important piece of the puzzle. Saying that, even if you're glued to the screen you're still in danger of being left confused as a number of the characters mumble their lines at important points.

The story, or what story there is, sees Casey Affleck's detective trying to track down a gang led by Chiwetel Ejiofor that's robbing banks. However unknown to Affleck's detective is that some of his own fellow police officers are mixed up with the gang.

The Triple 9 of the title refers to the code that a police officer sends out when there's an officer down and it's the gangs plan kill a cop so that the code will be passed out sending all available officers in the opposite direction to where their committing their final robbery.

With an all-star cast that includes Woody Harrelson, who seems to be the only good cop in the force, and Kate Winslet as the wife of a Russian Mafia boss, Triple 9 has its moments but it's the slow pace between the couple of spectacular action scenes that fails to lift it above the ordinary.