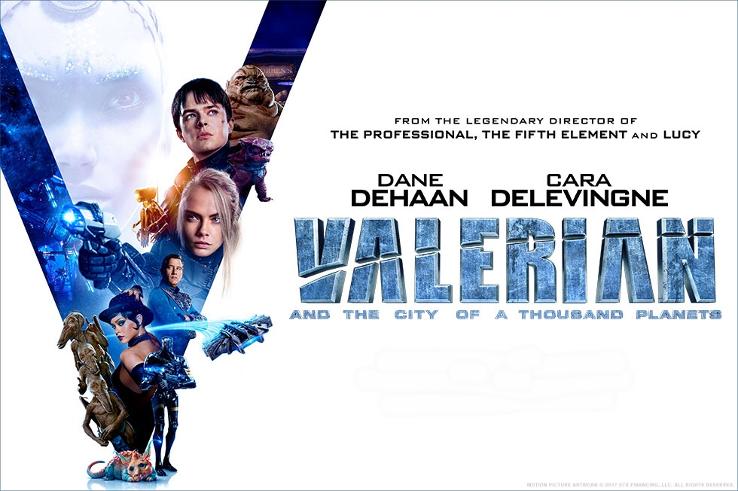 VALERIAN AND THE CITY OF A THOUSAND PLANETS is the visually spectacular new adventure film from Luc Besson, the legendary director of Leon, The Fifth Element and Lucy, based on the ground-breaking comic book series which inspired a generation of artists, writers and filmmakers.

In the 28th century, Valerian (Dane DeHaan) and Laureline (Cara Delevingne) are a team of special operatives charged with maintaining order throughout the human territories. Under assignment from the Minister of Defense, the two embark on a mission to the astonishing city of Alpha—an ever-expanding metropolis where species from all over the universe have converged over centuries to share knowledge, intelligence and cultures with each other. There is a mystery at the center of Alpha, a dark force which threatens the peaceful existence of the City of a Thousand Planets, and Valerian and Laureline must race to identify the marauding menace and safeguard not just Alpha, but the future of the universe.

A pretty enjoyable sci-fi adventure that takes an 'everything and the kitchen sink' approach to its story and special effects, stuffing the film with plenty of creatures, gadgets and MacGuffins whilst moving along at a frantic enough pace to take your attention away from any possible plot holes. It is also very much a film from the same director as The Fifth Element. Your enjoyment of this will very much depend on how you feel about that statement.

Dane DeHaan, usually perfectly cast as a quirky outsider, is slightly miscast here as the wise-cracking, maverick but noble hero but does his best. Whilst the much-maligned Cara Delevingne is actually very good as the co-lead. Ironically for a film where only the male lead's name appears in the title (unlike the original comics Valerian and Laureline), much is made of her character's desire to be considered an equal. I doubt the irony is intentional.
Clive Owen and Sam Spruell are fine in supporting roles, while Ethan Hawke is clearly having a blast in an over the top cameo as a flamboyant pimp.Even Rihanna is perfectly acceptable as a shape-shifting glam bot, despite the majority of her appearance involving a rather drawn out exotic dance. Other notable cameos include Rutger Hauer, Herbie Hancock, John Goodman and French directors and previous Besson collaborators Louis Leterrier, Olivier Megaton & Mathieu Kassovitz. See, even the casting is indulgent.
On the whole the film seems forever on the brink of collapsing into an impenetrable mess but just about keeps things on track by virtue of rarely slowing down, despite only losing some steam towards the end. It's arguable that the film tries to do too much and not everything works, but a film overflowing with ideas is better than one with none. It's fair to say you'll probably not see something that manages to be both as extravagantly budgeted and idiosyncratically weird as this that often which makes this worth a look for that alone at least.

Valerian and the City of a Thousand Planets (12A)