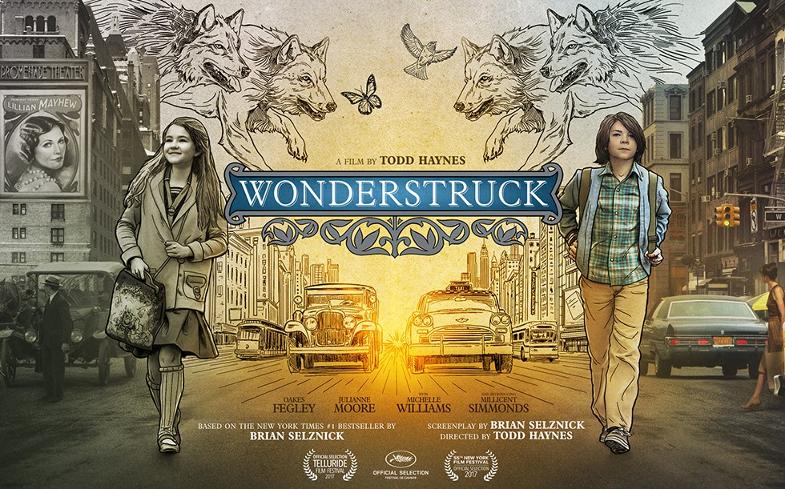 Director Todd Haynes first film since Carol (2015) is based on the semi-graphic novel by Brian Selznick, whose book Hugo was made into a movie of the same name by Martin Scorsese, and weaves two stories from two different timelines together.

The first narrative, and the stronger of the two, filmed in black-and-white and set in 1927, sees young Rose (Millicent Simmonds), a deaf girl, head to New York in search of her favourite silent movie star, Lillian Mayhew (Julianne Moore).

The second strand, set in 1977, sees 12 year old Ben (Oakes Fegley), whose mother, (briefly played in flashback by Michelle Williams) has been killed in a car accident, heading to New York in search of his father. The only thing that Ben is armed with is an old book titled “Wonderstruck: How Museums Began” which contains a bookmark from a bookshop that has a note written on the back to his mother from, he presumes, his father.

Ben, like Rose, is also deaf, having lost his hearing after an accident.

Wonderstruck, thanks to cinematographer Edward Lachren, looks absolutely wonderful. The contrast between the two stories couldn’t be more different. The black-and-white section, with no dialogue and only music, conveys the feeling of an old silent movie, whilst the 1970’s section is all loud music, noise and colours.

In the end Wonderstruck is a simple tale about family. It does flag slightly in the middle but more than makes up for it with a satisfying and moving conclusion.

If you’re a fan of cinema Wonderstruck comes highly recommended.