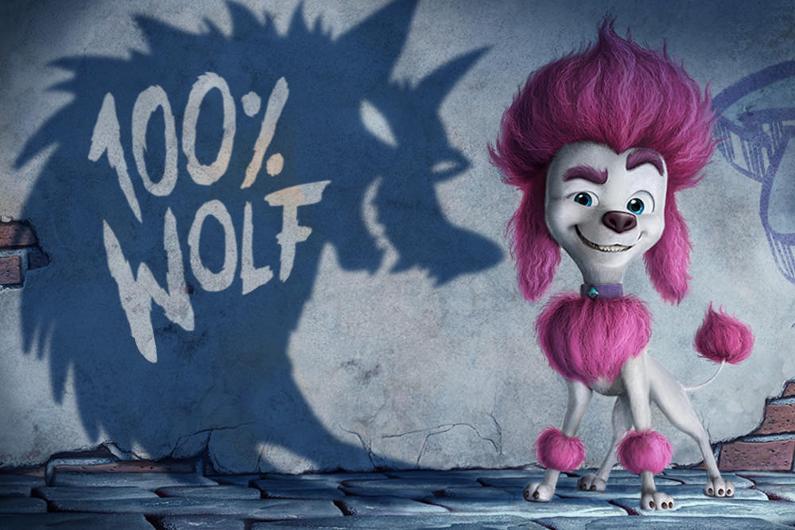 This Australian animated film at most times would be consigned to a streaming service or a DVD release, but this is Covid times and as such 100% Wolf gets released into cinemas to take up the slack left by the lack of Hollywood releases.

The story centres on young Freddy Lupan (voiced by Jerra Wright-Smith and Ilai Swindells), heir to the leadership of a proud family of werewolves, Freddy is not yet old enough to transform into a werewolf himself and must watch as his family carry out heroic deeds such as rescuing families from burning buildings.

It’s during one of these night-time excursions that poor Freddy’s father is killed and a family gem called the moonstone is stolen by an evil ice-cream vendor called Foxwell Crip, yes it’s that kind of story. The moonstone it would seem glows in the presence of werewolves and allows the holder to track them.

On his 14th birthday and when it’s time for his first “warfing” instead of turning into a werewolf poor Freddy turns into a poodle. Thrown out of the pack by his father’s not so honourable brother, Freddy takes it upon himself to retrieve the moonstone and prove that he’s a worthy member of the werewolf clan.

100% Wolf owes much to The lion King, the story of a dead father, an evil brother and a young cub setting out to prove himself, and meeting and making friends along the way, feels so familiar. The only surprise is that Elton John doesn’t turn up on the soundtrack singing “Can You Feel The Love Tonight”.

The animation looks at times if it’s been done for a cheap children’s television show and at just over 90 minutes youngsters might end up fidgeting in their seats.

100% Wolf might keep undemanding young kids happy but for any adults that are made to watch there’s not a lot here to keep you amused or entertained.