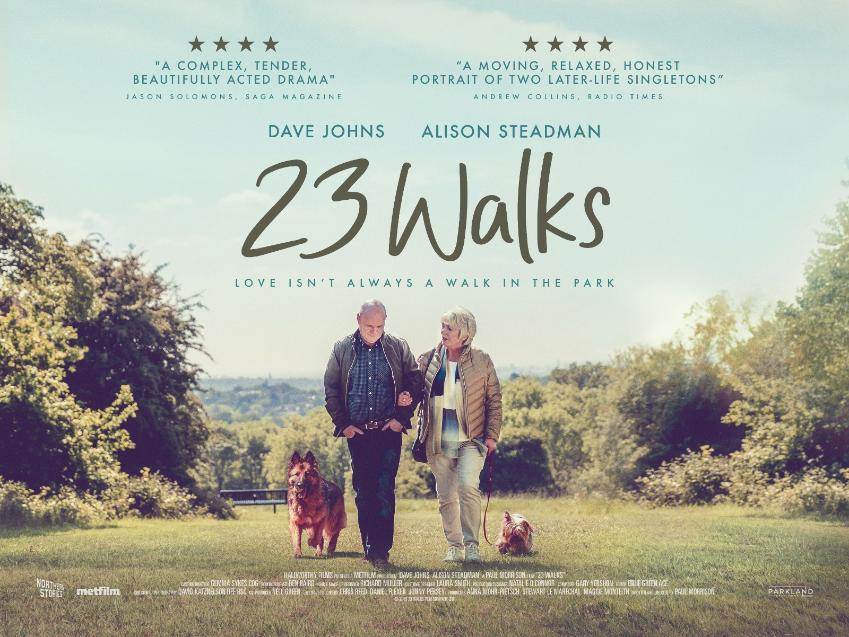 Releasing a film into cinemas whose target audience is of the somewhat elderly variety during a pandemic might not have been the best of ideas. With its target audience holed up in their homes for fear of catching the virus it’s hard to see 23 Walks setting the box office on fire, which is a shame as it’s the type of film that would be guaranteed to pack out Odeon’s silver screen showings.

Writer/director Paul Morrison’s easy going story tells of the relationship between Dave and Fern, (Dave Johns and Alison Steadman) two older strangers who meet whilst out walking their dogs.

We follow the romance over 23 walks, you know that because every so often up pops a title that tells you what number of walk their on.

As their romance blossoms it becomes more and more obvious that the pair haven’t been entirely honest with each other. As the walks continue and they both get to know each other we’re slowly let in on the truth, the big reveal is something of a shocker and raises the question, is one of the characters behaviour okay given their current circumstances? Sadly the choices that they make are mostly glossed over, why let morality get in the way of a good romantic story?

There’s a lot of dog walking and idle chit chat during 23 Walks running time, however fine performances from Johns and Steadman tend to help lift a film which at times can be a bit like their walks, slow and meandering.