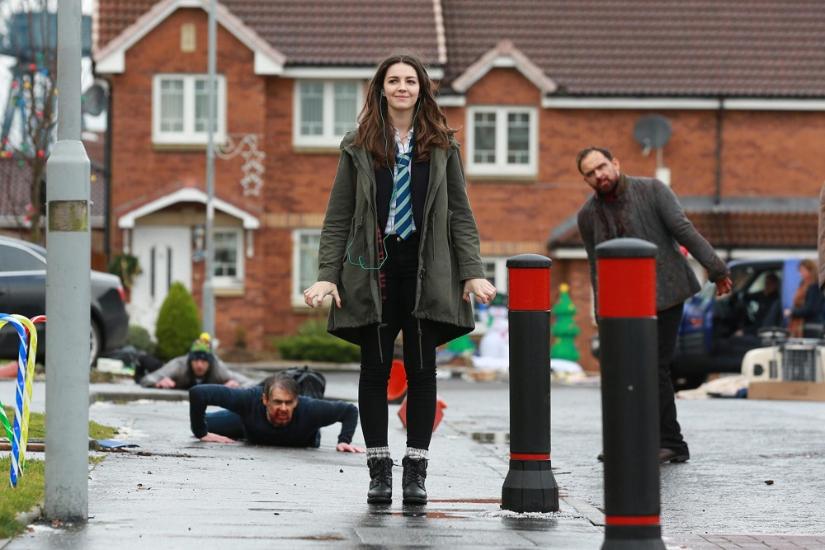 Review
Mixing Zombies with music in a Christmas setting shouldn’t really work, but in the case of Anna And The Apocalypse the mix of catchy songs and gore actually works very well. Its highly original story (which is based on a BAFTA winning short film called “Zombie Musical” by Ryan McHenry, who sadly died from cancer at the age of 27 in 2015) is well paced and contains a wonderful blend of humour and horror.

Filmed in Scotland, with a very talented young cast, the story, set in the fictional town of Little Haven, begins with Anna (a very talented Ella Hunt who, on the evidence of her standout performance, is destined to go far) breaking the news to her widowed dad (Mark Benton) that’s she’s planning to take a gap year when she leaves school and travel to Australia.

Anna And The Apocalypse is all very High School Musical up until this point and the last thing you expect is zombies to start eating the cast.

Things start to take a darker turn the following morning when Anna heads off to school.

Oblivious to her surrounding world Anna bursts out her home with her headphones on singing about how wonderful life is and “What a Time to Be Alive”. Meanwhile in the background mayhem has broken out with neighbours eating neighbours and explosions lighting up the dark morning sky.

As Anna sings and dances her way to school she meets up with singing and dancing best friend John, the pair only becoming aware of the mayhem that’s following them when a zombie dressed as a snowman tries to eat them.

Now we’re in full Zombie mode (don’t worry music fans there’s still plenty of singing, it is a musical after all) and Anna, who meets up with others along the way, must try and fight her way back to the school, where her dad is the janitor, and the annual Christmas musical is being held.

Anna And The Apocalypses mash up of music and horror won’t be to everyone’s liking but if you’re after a bit of a laugh and like the thought of Zombies rampaging through High School Musical then it comes highly recommended.