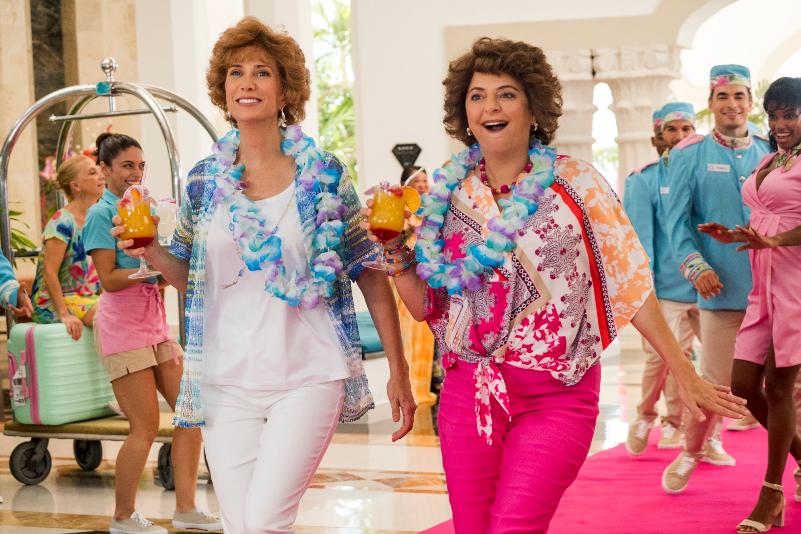 Kirsten Wiig and Annie Mumolo, the screenwriters behind the 2011 hit, Bridesmaids, team up again, in a writing and acting capacity, in Barb And Star Go To Vista Del Mar.

Whilst the pair don’t strike the same comic gold that they did in their previous collaboration, the comedy is a bit patchy at times, Barb And Star is still a lot of fun.

The plot sees divorced Star (Wiig) and widowed Barb (Mumolo) losing their jobs in a furniture store in the small town of Soft Rock. Disillusioned by their other interest in life, the local Talking Club, the pair decide to head to Florida to take a holiday at the paradise resort of Vista Del Mar.

Meanwhile in a subplot an evil villain, played by Wiig, who is sensitive to sunlight, has sent her henchman Edgar Paget (Jamie Dornan) to Vista Del Mar so that he can release killer mosquitoes on the town. The locals apparently made her life a misery when she lived there in her youth and this is her way of extracting revenge.

There is an air of silliness to Barb And Star, from the terrific musical number “Palm Vista Hotel” that greets the pair when they arrive at the resort to Jamie Dornan singing a song called “Edgar’s Prayer” that requires him to dance along a beach and gyrate up against a palm tree, to a couple of unexpected cameos, everything about Barb And Star is so over the top that you can’t help but be drawn in by its sheer enthusiasm.

Barb And Star might not be highbrow entertainment and some of its jokes do fall a bit flat, but if watched in the right frame of mind, Barb And Star can be a hugely enjoyable piece of nonsense.