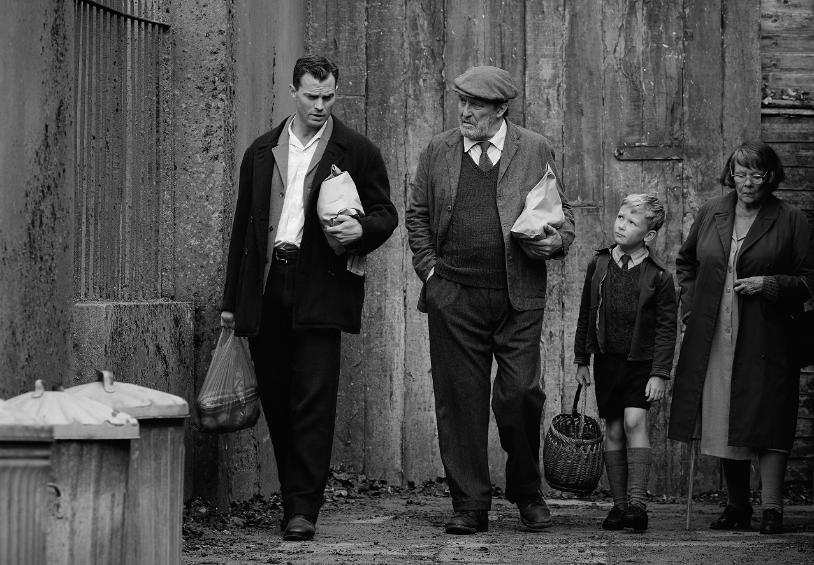 Belfast is based on Kenneth Branagh’s early life as a young boy growing up in Northern Ireland. Beginning in colour with an aerial view of modern day Belfast the camera travels over city landmarks until it comes to a graffitied wall. As the camera pans over the wall the image changes to black and white and we’re taken back to 1969 Belfast where kids are playing in the street and neighbours pop in and out of each other’s unlocked houses.

However within seconds everything changes as young Buddy (Jude Hill), from a protestant family, his older brother (Lewis Mc Askie), his mother (Caitriona Balfe) and his grandparents (Dame Judie Dench and Ciaran Hinds) are caught up in a riot as loyalists start targeting Catholic homes in the mostly protestant street.

Just as the riot is just about over the father of the family (Jamie Dornan) returns from his job as a builder in England to find the street barricaded off and his catholic neighbours being hounded from their homes.

Most of the story is seen through the eyes of young Buddy as he negotiates his first crush, his first run in with the police and the trauma of the break-up of his family as his parents contemplate moving the boys away from the trouble to the relative safety of England where his father has been offered a job with a house.

Beautifully filmed with a wonderful nostalgic feel, Branagh uses colour sporadically during his film and mostly during scenes where the family are watching movies at the cinema or are at the theatre, a family trip to the cinema to see Chitty Chitty Bang Bang, or Titty Titty Bang Bang as young Buddy calls it, being one of the highlights of the film.

The story is pretty thin but Branagh keeps his story short, it runs for just over 90 minutes, and as a result Belfast never over stays its welcome.