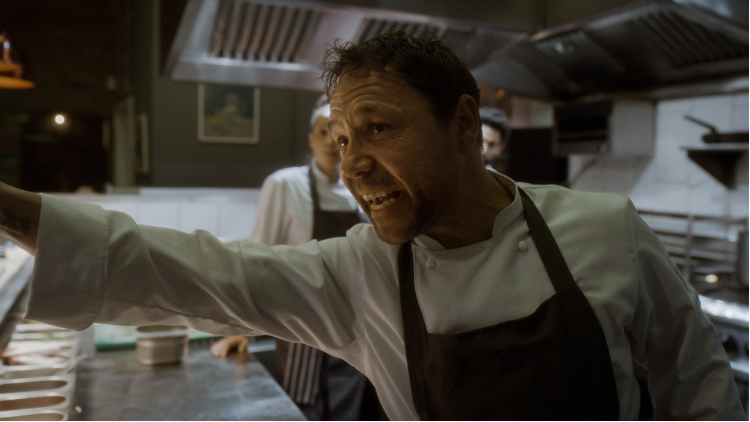 Shooting a film in one continuous take isn’t a new thing, director Alfred Hitchcock famously did it in 1948 when he filmed Rope in one take, well nearly in one take as he had to cut part way through to change the film in his cumbersome 35mm camera. Director Philip Barantani, using hand held digital cameras, has fewer limitations than Hitchcock had way back in the 40s and uses his camera to great effect as it follows his characters about for the entire running time of Boiling Point.

Set in a restaurant called Jones & Co., Boiling Point follows head chef Andy Jones (a terrific Stephen Graham) and his staff as they try and cope with a packed restaurant on a Friday night before Christmas.

Barantani begins his story out in the street where we first meet Andy Jones explaining to his wife why, because of work, he can’t see his kids. Already running late Jones is met in the restaurant by a health inspector who is knocking his kitchen down a few grades due to a lapse in food hygiene. Things don’t get any better from there on in as he has the added pressure of a celebrity chef (Jason Femyng) who turns up unannounced with a famous food critic whilst his staff, who are led by a woefully inexperienced manager (Alice Feetham), have to deal with obnoxious and over demanding customers.

It would be easy to single out Graham for praise but that would be unfair on the rest of the cast, including Vinette Robinson as the kitchen team leader and Ray Panthaki as an exasperated kitchen hand, are all terrific.

Knowing that Berantani filmed his story in one take only adds to the tension as you’re just waiting on someone to miss a cue or a line.