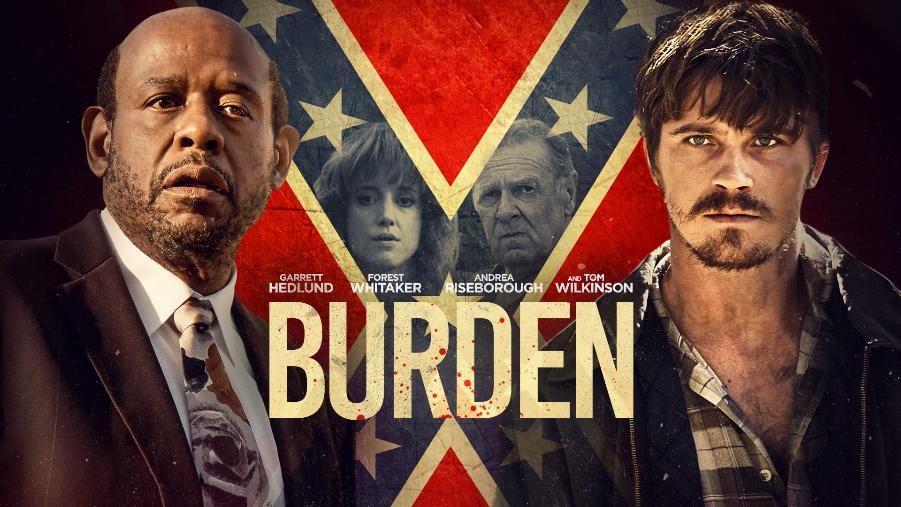 Having been filmed in 2018 and then sat on a shelf for two years waiting for a distributor Burden, given its themes of racial tension and bigotry, couldn’t have found a better time to be released.

Set in the late 90’s Garrett Hedlund plays Mike Burden a young man who has been brought up in the ways of the Ku Klux Klan by its leader Tom Griffen (Tom Wilkinson). Treated like a son by Griffin he helps him open a Redneck KKK Museum in an old theatre. The opening causes simmering racial tensions within the town to boil over and some search justice by violence whilst the town’s preacher Reverend Kennedy (Forest Whitaker) tries to calm things down by preaching compassion.

As all this is going on Burden meets and falls in love with a single mother called Judy (Andrea Riseborough). Judy is the polar opposite of Burden, she’s tolerant, has black friends and is against any form of racism. As their relationship grows Burden eventually finds that he has to choose between the woman he loves and the KKK.

Hedlund, with his sometimes hard to make out southern drawl, is particularly good as is Riseborough. Burden is a moving account of how racism effects small town America and is certainly now more than ever worthy of a watch.