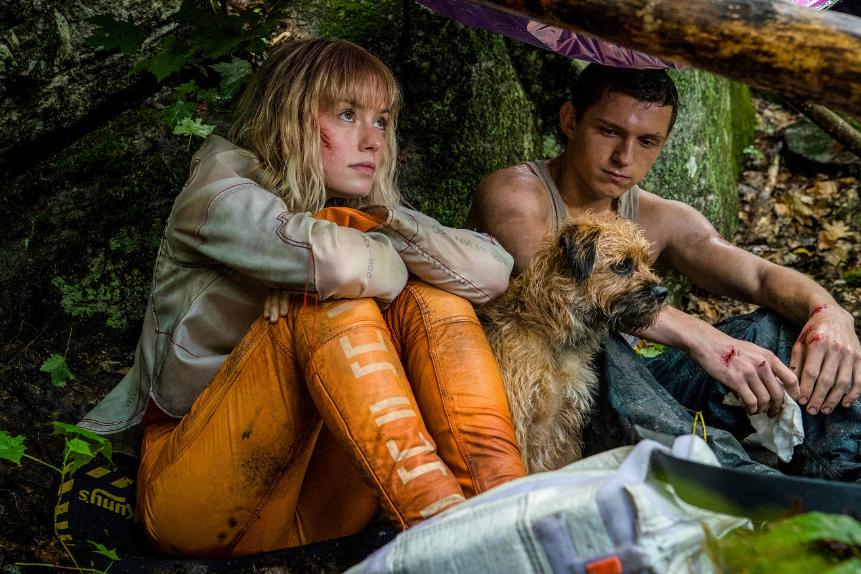 The noise is a man’s thoughts unfiltered, and without a filter a man is just chaos walking.

The opening quote, and one of the first things that we see on screen, in director Doug Liman’s hugely enjoyable sci-fi film, couldn’t describe the premise of Chaos Walking any better if it tried.

Chaos Walking is set sometime in the not too distant future on a remote planet where all the females are dead and the males have been inflicted by “the Noise”, a strange phenomenon that puts all their thoughts on display for everyone to hear. The youngest male on the planet, Todd Hewitt (Tom Holland), out of everyone, has the greatest problem keeping his thoughts to himself.

Todd, as all the men do, lives in a western type town ruled over by Mayor Prentiss (Mads Mikkelson) and his son Davy Prentiss Jnr (Nick Jonas).

When a ship approaches the planet the occupants’ send down a rescue team, unfortunately things go disastrously wrong and all the crew are killed with the exception of a female crew member called Viola (Daisy Ridley). After Viola is discovered, and fearful that the new ship and its 4000 or so passengers could impact on their way of life, Mayor Prentiss decides that the best thing to do is to kill Viola before she can radio for help.

Finding out their plans Todd arranges to travel with Viola to a place where she’ll be safe and can also communicate with her ship.

The story in Chaos Walking is pretty simple, it’s in essence just a chase movie. Holland is particularly good as the innocent Todd Hewitt, you’ll certainly remember his name by the end as it’s all he can say in his head to stop others reading his thoughts, he along with Ridley and Mikkelsen have the meatier parts. Peripheral characters like Nick Jonas’s and a preacher who’s hiding a dark secret, played by David Oyelowa, flit in and out of the story without really adding much to it.

With cinemas being closed for nearly the best part of a year cinematic films, films that you would expect to see in a cinema, have been few and far between, Mulan and Wonder Woman being amongst only a handful of films released that you could honestly say deserve to be seen on the big screen. Now add to the list Chaos Walking, it feels like a big budget feature, with an excellent cast and thrill a minute edge of your seat action, Chaos Walking is the type of film that reminds us how good cinema can actually be. Don’t miss.