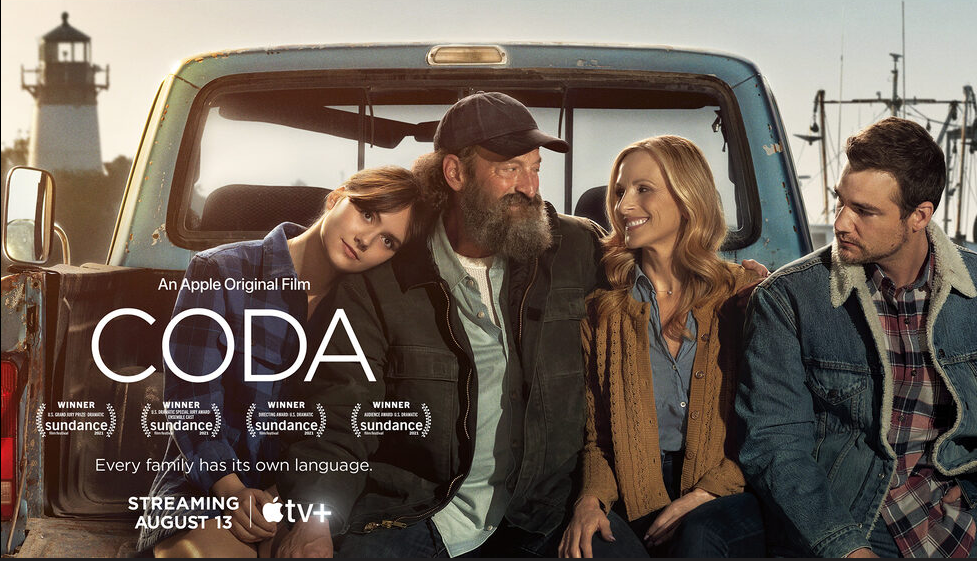 After its world premiere at this year’s Sundance Film Festival in the U.S., where it won 4 prizes including the coveted U.S. grand jury prize, Coda was the subject of a frenzied bidding war for the distribution rights, eventually won by Apple who paid a whopping $25 million.

Having watched this heart-warming and emotional movie it’s not hard to see why so many people have fell in love with it.

Coda tells the story of seventeen-year old Ruby (Emili Jones), the sole hearing member of a deaf family, CODA stands for child of deaf parents. Whilst her life revolves around either translating for her deaf parents (Marlee Matlin, Troy Kotsur) and brother (Daniel Durant) or getting up early in the morning before school to work on the family fishing boat, her real passion is singing.

Torn between her sense of obligation to her family and her love of song, Ruby, behind her parent’s backs, joins the school choir where, under the guidance of her tough choirmaster (Eugenio Derbez), she starts to see a way in which she can escape the drudgery of life in the small fishing village.

Needless to say her desire to go to college, which doesn’t fit in with her family’s needs and their reliance on her for just about everything, leads to friction and drama within the family.

With a wonderful standout cast, everyone is just perfect in their parts, it’s probably a bit unfair to really pick out one person but Emilia Jones is a star, already a BAFTA nominated actress playing the lead role of Kinsey Locke in Netflix's Locke and Key this young actor surely has the world at her feet, incidentally the beautiful singing voice is without doubt in her genes as she’s the daughter of Welsh singer Aled Jones.

Guaranteed to melt the hardest of hearts Coda is easily one of the, if not the, best movies of the year. Don’t miss