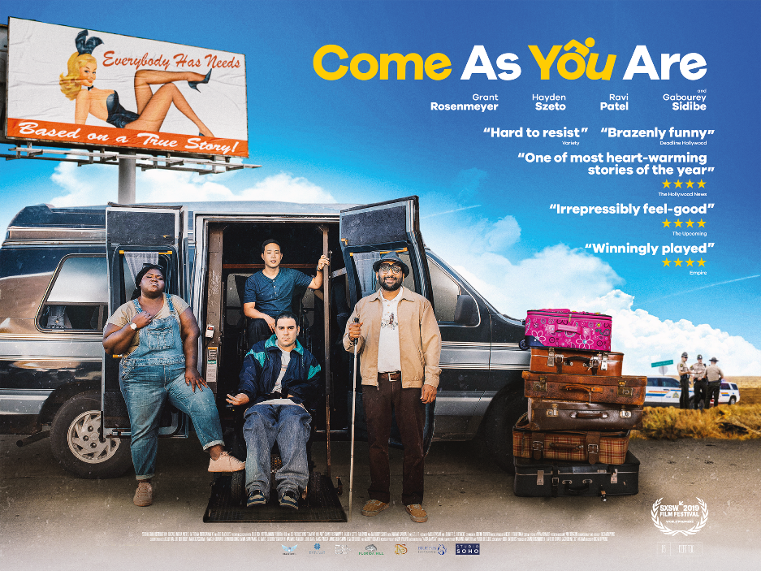 There’s been some debate on various forums regarding having three able-bodied actors playing three people with disabilities. The one thing that I can say is that the performances of Grant Rosenmeyer, Hayden Szeto and Ravi Patel, in the lead roles, certainly don’t make light of peoples disabilities and each performance is absolutely fantastic.

Come As You Are is based on the true story of American Asta Philpot. Philpot lives with arthrogryposis, a condition limiting physical movement. During a holiday to Spain in 2006 he heard of a legal brothel with access for wheelchair users, he subsequently visited the place and lost his virginity.

His story has been told a few times before, mostly notably in a BBC documentary and in the 2011 Belgium film “Hasta La Vista”. Hollywood has now picked up the story and transferred it from Europe to America.

Sticking closely to the Belgian original the story centres around three grown up males who, because of their disabilities, live with, and are heavily reliant on, their overbearing parents.

Scotty (Grant Rosenmeyer), whose disability means that he’s completely reliant on both a wheelchair and his mother (Janeane Garofalo), is just about at the point where he thinks life has gotten the better of him when he sees, on the internet, an advert for a Canadian brothel that caters for people with disabilities.

Scotty, who is mostly rude and hostile to anyone he meets, attends a physical therapy centre, here he meets Matt (Hayden Szeto), a former athlete who is now confined to a wheelchair. Matt’s condition is never revealed to the audience and unlike Scotty, Matt has the use of arms.

Making up the trio is 35 year old Mo (Ravi Patel), a blind worker at the clinic, who is overly cautious about everything and has severe reservations about making the journey.

The three virgins then hire a van, driven by, not he nurse that they were expecting but by Sam (Gabourey Sibibie) a no nonsense taxi driver, and they head off in search of their quest.

Come As You Are is a heart-warming feel good comedy that’s as touching as it is funny. There’s not a single bad performance in a film that comes highly recommended. Don’t miss.