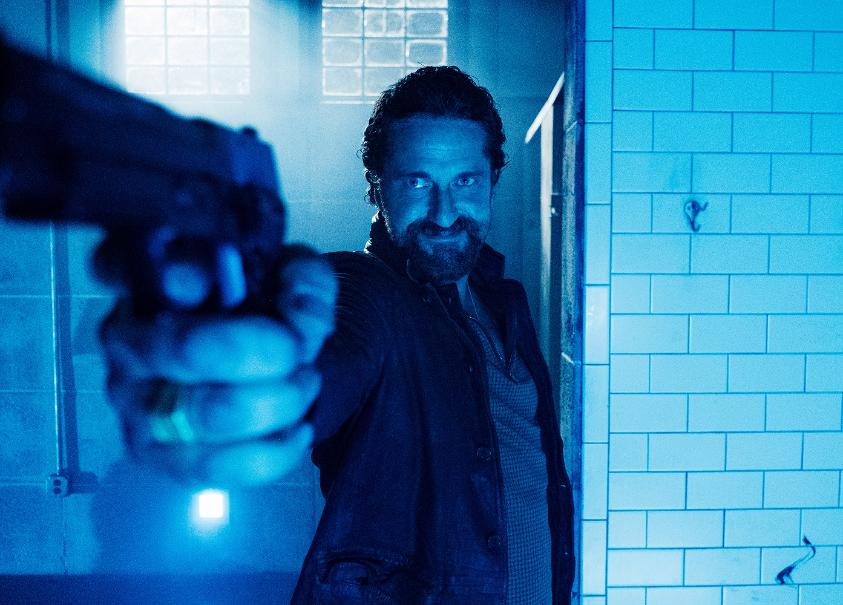 When rookie cop Valerie Young (Alexis Louder) attends a brawl at a wedding party she’s out of the blue punched in the face by someone not from the feuding party. Taken back to the police station it becomes quickly obvious that Teddy Murretto (Frank Grillo) would rather be there than out in the free world.

Minutes later two cops are inspecting a shot up vehicle, which we know, thanks to an earlier scene, was been driven by Teddy, when suddenly their vehicle is struck by another vehicle driven by a drunk driver (Gerard Butler). He in turn is arrested and after he’s booked in as a John Doe he’s thrown in a cell opposite Teddy.

Once the police are out of the way the unknown male quickly sobers up and tells Teddy that he’s there to kill him as he’s got a contract out on him. For the rest of the plot I’ll let you find out yourself as telling you how and why Bob Viddick, his true name which you later find out, wants to kill Teddy would spoil the enjoyment of Copshop.

With a story that’s never quite what it seems and with some great performances, Alexis Louder as the rookie cop is a standout and Tony Huss as an eccentric hitman almost steals the show, Copshop is an enjoyable action movie that’s only let down by an ending that goes on longer than it should. If you enjoyed Bad Times At The El Royale (2018), a movie that’s similar in both style and story, then there’s no reason why you won’t enjoy Copshop,