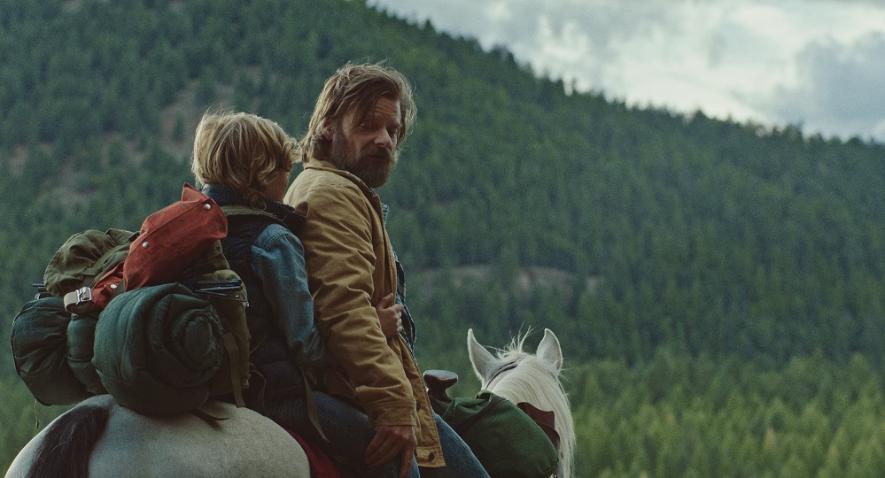 A trio of excellent performances help lift the meandering storyline of Cowboys into something entirely watchable.

Steve Zahn is Troy the troubled father of Joe, (Sasha Knight) an 11 year old girl who identifies as being a boy. Whilst Troy accepts his daughter’s choices the same can’t be said for his ex-wife and the child’s mother Sally (Jillian Bell). Blaming Troy for the way her daughter feels, “you fill her head with cowboy stories” she tells Troy, Sally blinds herself to her daughters inner feelings by trying to turn her into something she doesn’t want to be, dresses aren’t the clothes of choice for Joe, much to her mother’s annoyance.

Bonding more with her accepting father the pair, after Joe has a bust up with her mother, head off into the wilderness of Montana with the aim of making it across the border into Canada. Needless to say things don’t go so well, Troy loses his bipolar medication and things start to go downhill for the fugitive pair who are now being hunted by the local police after Sally reports that her daughter has been kidnapped by Troy.

As the pair journey across the wilderness the story is told in flashback allowing us to find out more and more about the family’s past.

Cowboys is an enjoyable story which is partly let down by a rather unconvincing final act, however take away that and you're left with a moving and touching story that at only 85 minutes doesn’t outstay its welcome. .