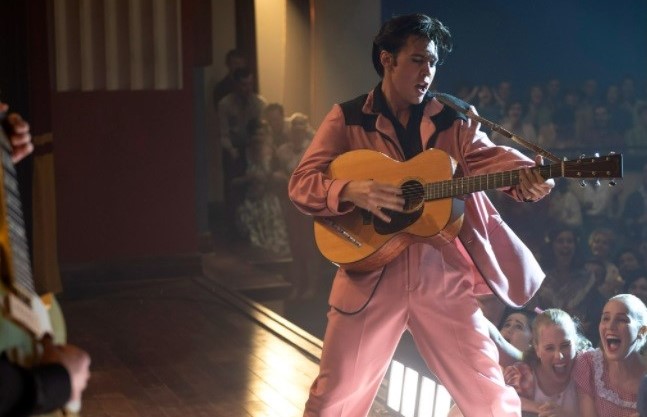 Baz Luhrmann, most famous for directing Ewan Mc Gregor and Nicole Kidman in Moulin Rouge back in 2001, brings to cinemas one of the best music biopics in recent years, and with everyone from Freddie Mercury to Johnny Cash appearing in their life stories at one time or another it’s a genre that’s been well covered. Elvis is a sparkling and dazzling journey exploring the career and music of the king of rock and roll, Elvis Presley.

Luhrmann’ story mostly covers Elvis’s relationship with his manipulative and demanding manger Colonel Tom Parker, Tom Hanks Playing a rare role as a villain, and takes us from his musical beginnings in 1955 when he first met Parker through various career highs including his life in the army, his comeback television Christmas special in 1968 and his Las Vegas residency in the 1970’s.

Luhrmann brings his usual colourful imagery to the screen meaning at times Elvis, the film, in terms of period detail, looks terrific. However a biography is always going to stand or fall by the actor playing the lead, and thankfully relatively unknown Austin Butler gives a career building performance as Elvis.

Enjoyable films have been few and far between in 2022, Top Gun: Maverick being one of the few standouts in a sea of mediocrity, now thankfully we have another one to add to the list of must see. Elvis might have left the building long ago but thanks to Luhrmann and his talented cast The King is back. Don’t miss.