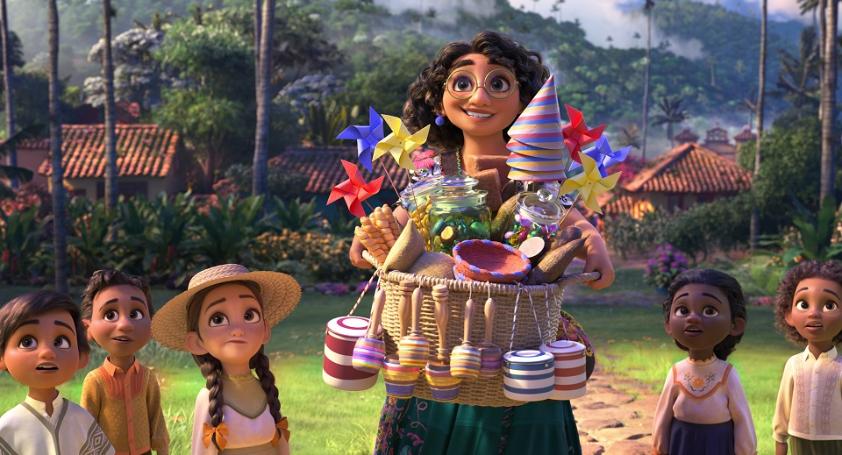 Disney, and animation for that matter, have come a long way from their very first full length animated motion picture Snow White and the Seven Dwarfs back in 1937. Now for its 60th animated feature Walt Disney Animation Studios brings us Encanto a tale of a family called the Madrigals who, when fleeing persecution in their Columbian village, end up in a magical village called Encanto.

Cut off from the outside world the village bestows on its inhabitants, when they reach a certain age, one magical power. That is except for Mirabel (Stephanie Beatriz) the youngest of three Madrigal sisters, whilst her sister Luisa (voiced by Jessica Darrow) possesses superhuman strength and her sister Isabela (Diane Guerrero) is perfect in every way, so perfect in fact that she can make flowers burst into bloom, poor Mirabel is given nothing but self-doubt.

The secret of the village’s power is a magical candle which has to be kept burning or the village and all the villagers powers will disappear. When the candle begins to dim and the family start to split it’s left to Mirabel to keep the flame and in turn her family together.

Encanto owes a lot to previous Disney films and it’s probably no coincidence that it has similarities to the likes of Frozen and Moana. Beautifully animated and with some of the best songs, written by Lin-Manuel Miranda of Hamilton the musical fame, since the aforementioned Frozen, Encanto is a delight from start to finish and comes highly recommended.