Edinburgh International Film Festival is back in St Andrew Square and everyone’s invited!

Presenting an ambitious and free programme of family favourites, timeless classics and blockbusters in partnership with Essential Edinburgh, and supported by Johnnie Walker and EventScotland, Edinburgh International Film Festival makes a long-awaited return to one of the city’s most iconic locations, St Andrew Square, with ‘Film Fest in the City’ between 19th and 25th August.

This special open-air series of screenings coincides with the main programme of in-person and digital film premieres as part of the 74th edition of the city’s International Film Festival, not only ensuring the Festival’s city-wide presence but making cinema accessible to both film buffs and Edinburgh residents of all ages!

The event is free but ticketed . Tickets are available to Filmhouse Members on Wednesday 28 July, and will be on general sale from Thursday 29 July, by visiting www.edfilmfest.org.uk.

Audiences will enjoy the outdoor screenings in a safe, outdoor environment adhering to the Scottish Government guidance in place at the time, and with an amazing range of food and drink produce available to purchase on site, including EIFF’s Official Whisky Partner Johnnie Walker and EIFF Official Beer Partner Innis & Gunn, alongside Poco Prosecco offering alcoholic and non-alcoholic refreshments. 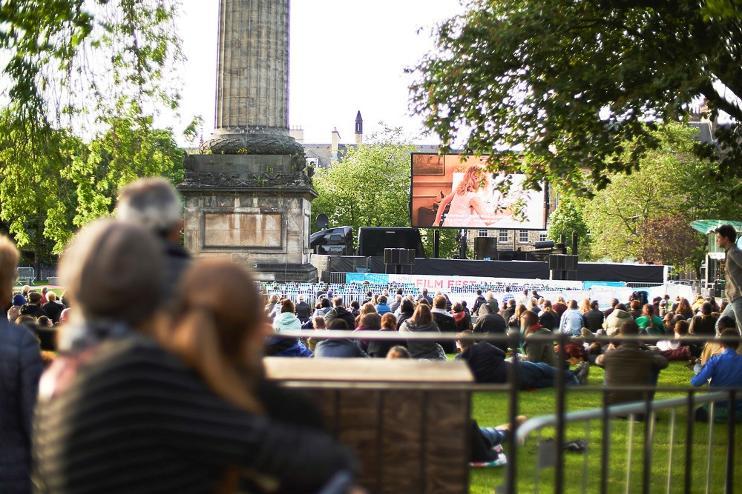 Nick Varley, Lead Guest Programmer of EIFF and Film Fest in the City said : “This year our Film Fest in the City screenings are simply put a celebration of the big screen. After a year of cinemas remaining closed and audiences being deprived of the shared experience only cinema brings, we are delighted to present a selection of films that, in our opinion, represent the true meaning of big screen entertainment. For those looking for a theme or meaning in the selection let’s just say it’s cinema for cinema’s sake – enjoy!”

Roddy Smith, CEO of Essential Edinburgh, said : “We are absolutely delighted that Film Fest in the City is returning bigger and better this year. It is always a great event, and to have a full week of screenings in St Andrew Square Garden this year is something to really look forward to. Our city centre has reopened with thousands of residents and visitors flocking back to enjoy everything it has to offer. What better way to enjoy summer than an outside screening of a classic film in a safe environment, in between some retail therapy or sampling the amazing hospitality offering within a five minute walk of the Square.”

Eileen Hanna, Head of Scotch and Lifestyle Whiskies at Diageo, said: “The magic of film has served us well through the past 18 months with so many of us re-watching old classics and discovering new favourites while being at home. However, nothing beats watching a movie on the big screen and we’re delighted to be supporting the Edinburgh International Film Festival for a third year.

“Johnnie Walker’s brand ethos is all about striding forward and the film industry is a perfect example of that. The list of classic screenings on show at this year’s EIFF features some of the most talented on screen and behind the screen talent that have gone on to become huge stars, showing how the spirit of progression is very much alive in the film industry.”