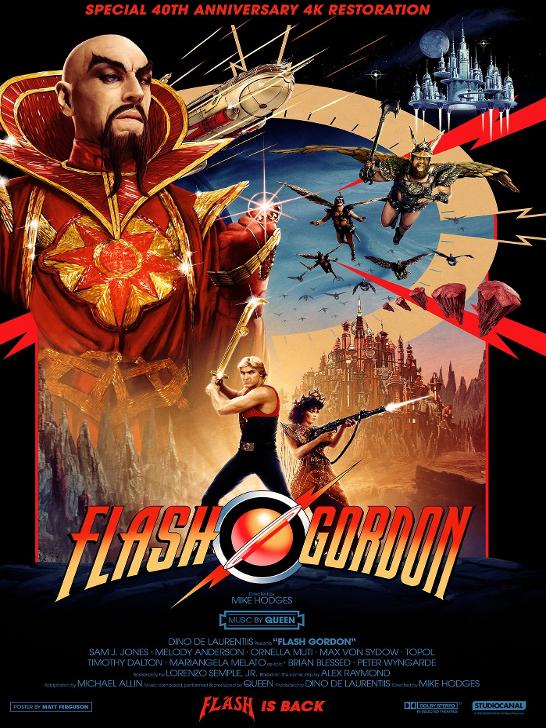 Prepare to save the universe with the King of the Impossible! Alex Raymond's famous comic strip blasts to life in the timeless sci-fi cult adventure Flash Gordon! When energy waves pull the moon out of orbit, New York Jets quarterback Flash Gordon unwittingly finds himself heading for the planet Mongo, where - with assistance from beautiful Dale Arden - he'll take on Ming the Merciless and rescue humankind. The undisputed cult classic Flash Gordon is newly restored in 4K and yours to own on 4K UHD Collector's Edition, Blu-Ray, DVD and Digital August 3rd

For the new 40th Anniversary 4k restoration, Flash Gordon was scanned from the original 35mm negative to produce 4K files. Over 500 hours of manual restoration repaired serious damage that included image instability, scratches and intermittent flicker. The sound was scanned from the original track negative and underwent restoration to improve issues ranging from audio drop-outs throughout the feature and during reel changes, digital clicks and optical distortion. The film was colour graded for theatrical, home entertainment and 4K HDR release, using previous digital releases and 35mm prints as a reference. In line with the Director's vision and the original 35mm cinema release, VFX work was applied to remove the strings in all scenes where visible. This restoration was approved by Director Mike Hodges in May 2020, and will include the first 4K HDR Dolby Vision master of Flash Gordon.

"I'm very grateful to STUDIOCANAL for this brilliant 4k restoration. The restoration captures perfectly the vivid colours of the sets, skies and costumes. It also corrects some of the problems encountered with the special effects system we used. With Chroma key compositing we could insert skies, rocket ships, hawk-men, pretty well whatever we wanted, into the blue backing built into the studio sets. The problems came later when we had to eliminate, for example, the wires used on the hawk-men. We were eventually successful but even then some 35mm prints were variable and the wires would be back again. With this new restoration that problem is thankfully laid to rest. Of course Chroma key is primitive by the side of the current process, CGI (Computer Generated Imaging). That said I'm pleased we stuck with the old fashioned system. CGI would have been too slick. After all Flash Gordon was a cartoon strip from the 1930s brought back to life on celluloid some five decades later." Mike Hodges, April 2020