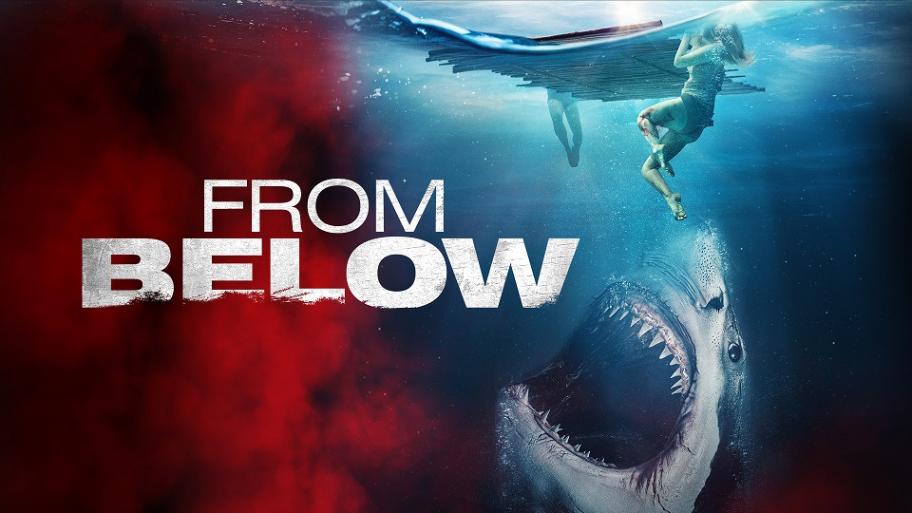 Low budget, they’re so bad they’re good, films have been a staple diet in Hollywood since the birth of film, Plan 9 from Outer Space (1959) probably being the most famous. With their cardboard sets and ropey acting many of the so called B movies have went on to have a cult following. Wither From Below, a classic B movie in every way, goes on to have any kind of following only time will tell.

The story, as is the way with most B movies is absolutely ludicrous but that’s the fun of a B movie as you know not to take it too seriously, sees Jaelyn (Alicia Silverstone) and Kyle (James Tupper) heading for a getaway holiday in Vietnam just after Jaelyn has lost a child during her pregnancy.

Pitching up in a seaside villa attached to a jetty a storm hits the coast on their first night washing the wooden villa and the hapless couple out to sea.

With a mixture of bad lack and gross stupidity on their part the pair find themselves adrift, on the remains of their luxury apartment, in the middle of the South China Sea. Looking at their large makeshift raft we, the audience, would think, that looks pretty safe let’s just float here until a passing ship sees us. But no our dim-witted pair, after seeing a ship on the horizon, have to strike up a fire on the only thing keeping them from the shark infested waters, their wooden home. Coming as something of a surprise to the pair the fire spreads engulfing their floating refuge leaving them adrift in the open sea.

I won’t spoil it anymore but needless to say the rest of the plot involves sharks, pretty bad CGI sharks at that, and a desperate fight by the couple to stay alive.

From Below, called The Requin in the US, with its bad acting really poor CGI and terrible sets is so silly that it actually becomes quite memorable, memorable for all the wrong reasons but memorable non the less.

If you’re looking for a film that’s has as many (unintentional) laughs as it has screams and one that doesn’t take itself too seriously then it might just be worth taking a dip in the water, just beware of the sharks.

3/5
From Below (aka The Requin)
1h 29m
Director: Le-Van Kiet
Cast: Alicia Silverstone, James Tupper
UK Release: on Altitude film and other Digital platforms from 7th February and on DVD 21st February 2022