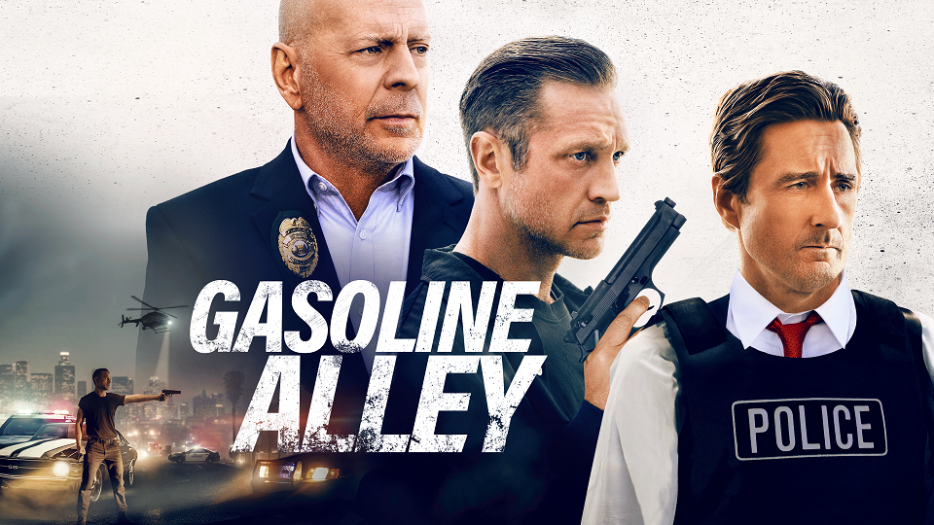 Bruce Willis films of late should perhaps come with a warning attached and it should read “although Bruce Willis is given top credit in this film his name attached should have no bearing on the time that he actually appears in this film”. In Gasoline Alley, as in numerous other films that Willis has appeared over the last few years, Willis appears for mere minutes in the running time of the film, the only apparent reason he can be there is do draw fans in – under false pretences I would say if you’re buying or renting this only to see Willis in action.

Underused and acting, in the few minutes that he appears, as if he can’t be bothered Willis’s presence only draws down a film that, without him, might have been pretty half decent.

The Gasoline Alley of the title is a tattoo parlour run by ex-con Jimmy Jayne (Devon Sawa). After a number of prostitutes are found brutally murdered Jayne becomes the prime suspect in a case being investigated by LA Homicide detectives, Freeman (Bruce Willis) and Vargas (Luke Wilson).

The plot involving girls in the adult movie industry, human trafficking and drugs moves along at a steady pace but does at times with the introduction of various random characters become a bit confusing and the ending will come as no surprise to anyone that’s managed to keep up with the plot.

Sawa, who, no matter what the marketing people or the end credits say, is actually the star of Gasoline Alley is pretty charismatic in his role, don’t be surprised if he crops up in bigger and better films in the future. Wilson is in the film for just slightly longer than Willis but at least he has the decency to look interested when he’s on the screen.

Gasoline Alley won’t win any awards but it is certainly much better than some of Willis’s recent vehicles, Apex, American Siege, Breach etc, all of which have either been directed or scripted by Gasoline Alleys director Edward Drake. In fact Willis has appeared in so many of Drakes previous films over the last couple of years it makes you wonder if Willis owes him a favour.

Don’t go into this film expecting a Bruce Willis action film as that’s not what you get. What in fact you do get is a competent thriller with a great performance from Devon Sawa and proof that some action heroes should either hang up their vests or get a better agent.