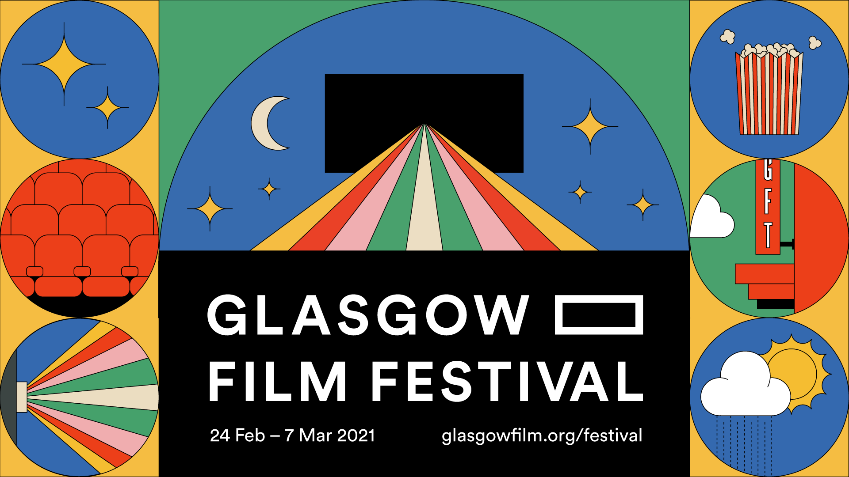 Glasgow Film Festival will screen in

Opening and Closing films are among the festival premieres which will screen at 22 partner cinemas across the UK.

starring Steven Yeun, will open the Festival on 24 February.

Glasgow Film Festival (GFF) is taking its premieres nationwide for 2021, with a partnership of 22 cinemas around the UK. Running from 24 February to 7 March, GFF’s 17th edition will link up with cinemas across the four nations, in order to welcome audience members who are not able to travel to Glasgow but still wish to experience their favourite festival on the big screen. In addition to these venues and Glasgow Film Theatre – GFF’s home in the city – festival films will screen on our new online platform Glasgow Film At Home, to safely provide the GFF experience for film fans all across the country.

For the first time, audiences will be able to take part in Glasgow Film Festival in towns and cities nationwide. From An Lanntair in Stornoway, to Chapter Arts Centre in Cardiff, Queen’s Film Theatre in Belfast, and three cinemas across London – BFI Southbank, Barbican and Curzon Soho – GFF premieres will be screening in independent cinemas all around the UK. Further partner cinemas will have exclusive screenings in: Aberdeen, Bo’Ness, Bristol, Dundee, Edinburgh, Ipswich, Inverness, Keswick, Leicester, Manchester, Northampton, Northumberland, Nottingham, Oxford, Sheffield, and Stirling.

Each partner cinema will show the Opening and Closing films of the festival, as well as a selection of cinema-only screenings from the festival programme, to be announced in January.

The UK premiere of Altitude’s Minari, which will open GFF on Wednesday 24 February. Minari is an award-winning autobiographical drama from director and screenwriter Lee Isaac Chung, which won the US Dramatic Grand Jury Prize and US Dramatic Audience Award at the 2020 Sundance Film Festival .

Starring Steven Yeun, best known for playing Glen inThe Walking Dead, and his chilling performance in Burning, Minari follows a Korean-American family who move from the big city to a rural Arkansas farm in search of the American Dream. Jacob (Yeun) plans to grow Korean vegetables to sell to other immigrant families. His wife Monica ( Yeri Han) is wary of his ambitions, and their two children, five-year-old son David (Alan Kim) and daughter Anne (Noel Kate Cho) are restless in the rural setting. The whole dynamic changes with the arrival of their sly, foul-mouthed grandmother from South Korea, Yuh-Jung Youn. Underneath the instability and challenges, Minari, named after a vegetable otherwise known as Korean Watercress or Chinese Celery, shows the undeniable resilience of a family and what really makes a home.

GFF will close on Sunday 7 March with Curzon’s Spring Blossom, the remarkably assured debut feature from writer, director and actress Suzanne Lindon. Spring Blossom is an elegant tale of a bored Parisian student (Lindon ), tired of her routine, who meets an older actor, Raphaël ( Arnaud Valois), outside the theatre she passes each day. Curiosity gradually turns to infatuation in a tale of first love that unfolds in the streets and cafes of a sun-kissed Monmartre. Lindon expertly captures the feelings of a teenage girl on the cusp of adulthood, finding and losing herself, all set against a beautiful Parisian backdrop.

The full programme for GFF will be announced on 14 January. Tickets for the programme, including the Opening and Closing films, will go on sale on Monday 18 January. Find more information at www.glasgowfilm.org/festival

“I am honoured that Minari will have its UK premiere at Glasgow Film Festival.

We made this film in 2019 in a very different time, hoping that the story would connect with audiences all around the world. What I wouldn’t give for the fantasy then, that along the run, I might travel to the Glasgow Film Theatre and join with Scotland’s best cinephiles. In any case, I’m grateful to the festival for this opportunity, and I salute all their best efforts to showcase films during our strange times. Minari is a story of immigrants living in a new land while reinventing what it means to be a family. We are all immigrants now.”

“Working in partnership with cinemas all around the UK means we can bring fantastic films and premieres to audiences across the four nations and still give that big screen experience that makes cinema so exciting.

We are delighted to be opening the 17th Glasgow film Festival with Minari, a heart-warming, affecting portrait of a family set against the beautiful Arkansas countryside. Steven Yeun gives a powerful portrayal in Lee Isaac Chung’s autobiographical drama, with scene-stealing performances from Yuh-Jung Youn and Alan Kim as a grandmother and grandson at cultural odds.”