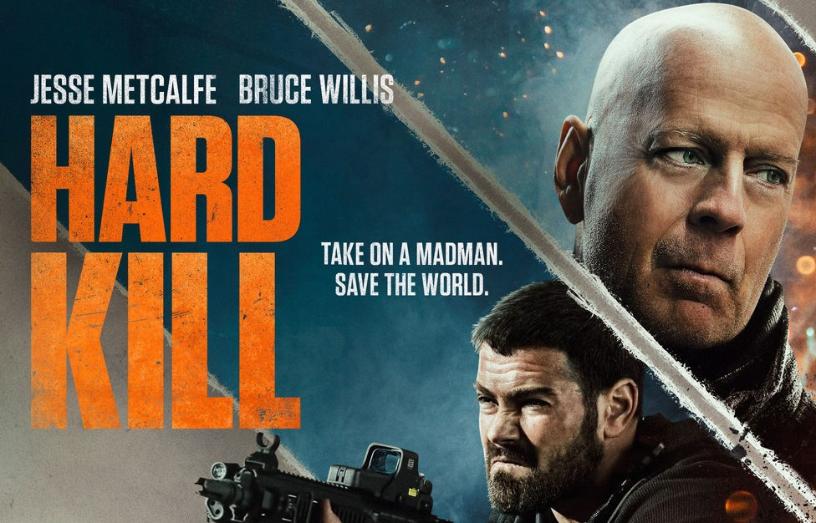 Normally there’s something positive that you can take from a film, it might look cheap but the music’s good, the story might not be great but the acting’s good, sadly Hard Kill (not to be mistaken with the 1990 Steven Seagal film of the same name) is so bad on so many levels that there is absolutely nothing positive that could be taken from possibly the worst career choice Bruce Willis has made, well maybe not as I’ve just remembered Hudson Hawk. Unfortunately like the other great 80’s action stars, Sylvester Stallone and Arnold Schwarzenegger to name but two, he seems to now have put hard cash (no pun on the title intended) over career choices and will star in any film where the producers wave a big pay cheque in his face.

The story, or what little there is of it, sees billionaire tech CEO Donavan Chalmers (Willis) hiring a team of mercenaries led by Derek Miller (Jesse Metcalfe) to protect him from a terrorist called The Pardoner. (Sergio Rizzuto).

The Pardoner it would seem has kidnaped Chalmers’s daughter and stolen a piece of technology that could destroy civilisation. You know the Pardoner is bad as like every good Bond villain he likes to play with an object in front of his victims, this time it’s not a cat but a Rubik’s Cube, honestly I couldn’t make it up even if I wanted to.

Set entirely in a derelict factory complex Hard Kill looks and feels as if the whole budget has been spent on Willis’s wages, hopefully the producers weren’t over charged as his screen time mustn’t add up to more than 15 minutes in total.

With the story out of the way in the first 10 minutes the rest of the running time involves endless shots of black combat clad soldiers stalking through the corridors looking for Willis and his team of mercenaries. To keep within budget it looks suspiciously like it’s the same three soldiers that keep getting killed over and over again, the only part of their body that is visible is their eyes so it’s hard to be really sure but I’m almost certain that’s the case.

I could go on and on listing the faults with Hard Kill, don’t even get me started on the acting and the bad Bruce Willis body double, it could be his mother (if she’s still alive), but I won’t.

If you’re looking for a film that’s bad, but not in a so bad it’s good kind of way, then Hard Kill might be for you otherwise I would avoid.

If curiosity does get the better of you don’t say you weren’t warned.