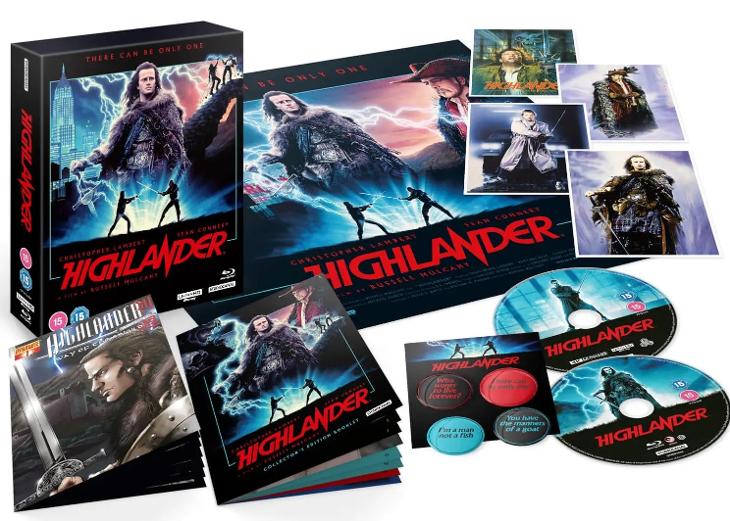 STUDIOCANAL has announced that the iconic cult classic, HIGHLANDER, will soon be available to own on 4K UHD for the very first time.

The HIGHLANDER 4K UHD COLLECTOR’S EDITION will be released on October 31 with brand-new artwork from celebrated artist Matt Ferguson, a 64-page booklet, prequel comic #1 Way of the Sword, a set of badges, art cards and poster. The two-disc set will also include a wealth of new extras including the first extensive ‘Making of’ documentary featuring all of the main cast and crew. The 4K version will be released digitally in the UK the same day.

Featuring an unforgettable original score by Michael Kamen and Queen, HIGHLANDER went on to inspire four further sequels and a television series.

THERE CAN BE ONLY ONE

1985 New York City; the Battle to end all Battles. The last remaining Immortals gather together to fight to the death: decapitation alone can kill them, and the victor alone can lay claim to “The Prize”. Amongst the contestants is Connor MacLeod (Christopher Lambert), who fought his first Battle in 1536 on the highlands of Scotland, swordsman Ramirez (Sean Connery) who mentored MacLeod and taught him the ways of the Immortals, and the evil and brutal barbarian Victor Kurgan (Clancy Brown).

NEW - THE IMMORTAL ATTRACTION OF HIGHLANDER: Looking back at four decades of Highlander magic in a brand new and exclusive 56 documentary featuring new interviews with Director, cast and other key crew

NEW - A KIND OF MAGIC: MUSIC OF THE IMMORTALS: A featurette on the Soundtrack

NEW - THERE CAN BE ONLY ONE KURGAN – Clancy Brown remembers Highlander