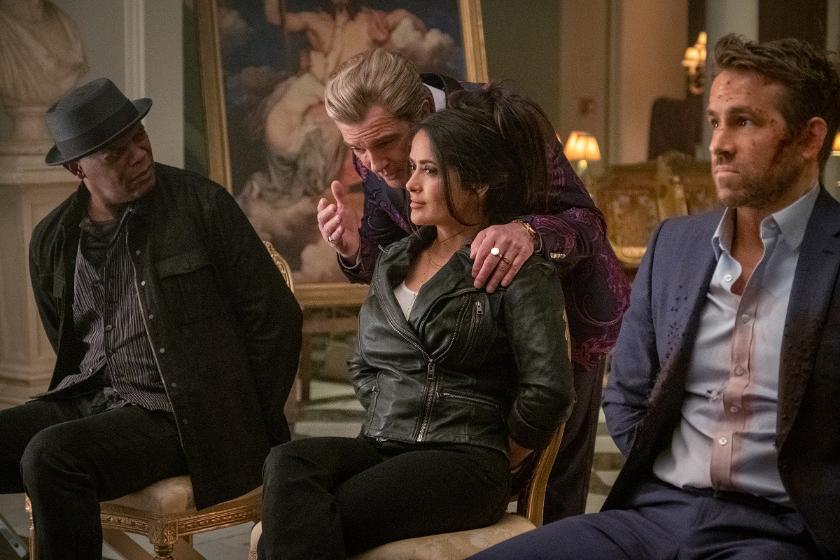 With a worldwide gross of $176.6 million in 2017 a sequel to The Hitman’s Bodyguard was always a certainty. The only surprise is that it’s taken 4 years to hit cinema screens, in fairness a global pandemic didn’t help its release.

Following on from the first movie Sonia Kincaid (Salma Hayek) is now free of her prison cell and turns to bodyguard Michael Bryce (Ryan Reynolds) for help in freeing her husband, hitman Darius Kincaid (Samuel L. Jackson), from the clutches of the mob. The only problem is that Bryce is now receiving counselling after having lost his bodyguard status and his AAA licence.

Reluctantly Bryce helps Sonia Kincaid free her husband but then ends up tied to the pair when their forced by an Interpol agent (Frank Grillo) to a stop Greek madman (Antonio Banderas) who’s determined to bring financial ruin to the rest of Europe.

The Hitman’s Wife’s Bodyguard plays to the strengths of the first movie, car chases and bloody mayhem are the order of the day, although in trying to add some back story, Darius and Sonia Kincaid apparently want to have a child and Michael Bryce has a father who is a better bodyguard than him (a nice surprise cameo), the story does tend to drag between the action scenes.

If you enjoyed the bickering between Jackson and Reynold’s characters in the first movie and weren’t put off by the excessive violence then The Hitman’s Wife’s Bodyguard being pretty much just more of the same should make for another entertaining watch.