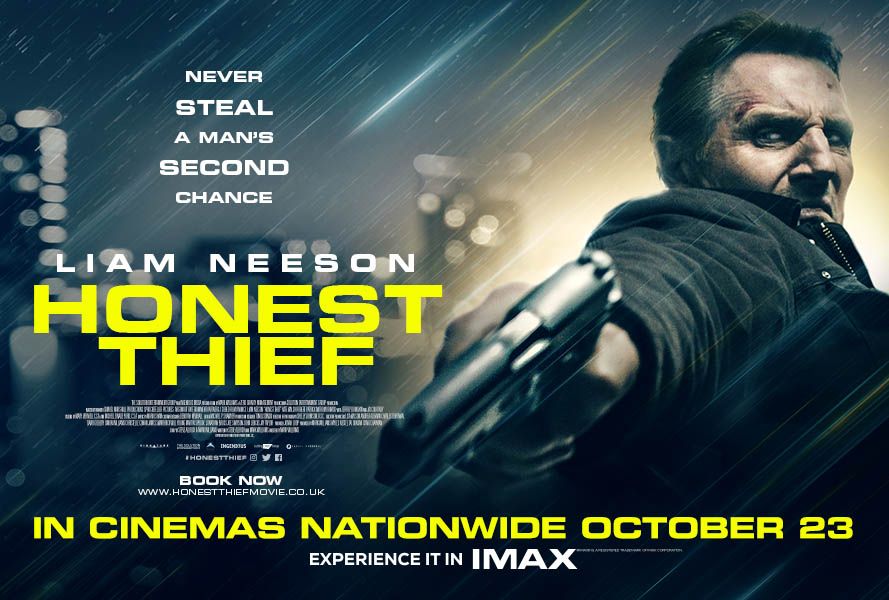 For a while it looked as Liam Neeson had hung up his action man persona and settled on a quieter more leisurely type of film. However it would appear that with Made in Italy and Ordinary Love, Neeson was just drawing breath as he’s back kicking butts in the type of role we know him best for.

In Honest Thief he plays Tom Carter, a career bank robber whose nicknamed the in out bandit by the media owing to the fact that when he robs banks he does a bit of DIY afterwards so that no one knows that he’s been there.

Whilst shopping for a lockup to store his stolen cash in he meets and falls in love with Annie (Kate Walsh). Smitten by her beauty he decides that honesty is the best policy and that it would be better to start their relationship with a clean slate.

Tom’s plan then involves him booking into a hotel and then calling the FBI and confessing, the deal being that, if he hands all the money back, he gets a reduced sentence in a prison that’s not too far away from Boston, Annie needs to visit after all.

At first he’s treated as a bit of a joke by FBI Agents Baker (Robert Patrick) and Meyers (Jeffrey Donovan) but, after some persistent phone calls, Agents Nivens (Jai Courtney) and Hall (Anthony Ramos), pay Tom a visit at his hotel.

At this point, for a man whose life has involved robbing banks, he becomes a bit trusting and, as a carrot, he tells the agents where $3 million dollars of his stolen $9 million is stashed.

Unsurprisingly the sight of all that money turns the heads of Nivens and Hall and they decide to keep the money for themselves. However prior to them finding out where the rest of the cash is the pair commit a murder and frame it on Tom.

The rest of the film sees Tom either being chased by or chasing the two agents whilst trying to prove that he’s not guilty of the murder.

Honest Thief is a pretty much like every other Liam Neeson action film that there’s ever been, Tom Carter could be Bryan Mills in Taken, Michael MacCauley in The Commuter or Matt Scudder in A Walk Among The Tombstones but I suppose that’s the beauty of Honest Thief as you know exactly what you’re going to get even before you enter the cinema.

Honest Thief might not be brilliant, it’s basically a straight forward B movie, but if you’re a Liam Neeson fan looking for your fill of him playing the action man there’s plenty here to keep you happy.